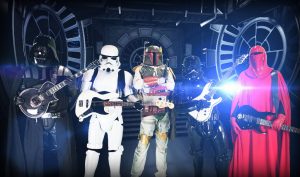 GALACTIC EMPIRE, the heavy metal band whose line-up boasts some of the most infamous and feared villains in the galaxy, have postponed their UK invasion.

The December UK dates have been rescheduled February 2017, which will coincide with the launch of The Empire’s most powerful weapon ever, the band’s debut album, out 3 February via Rise Records.

Dark Vader (lead guitar) explains: “Greetings loyal subjects of the U.K. System. The rebel traitors have stolen our plans for the upcoming December 1-20 tour dates. We have been forced to re-schedule our sonic devastation for February 2017. All tickets sales will be honoured for the new dates, or refunded. There will be no one to stop us this time!”

All tickets will be honoured for new dates or refunded.