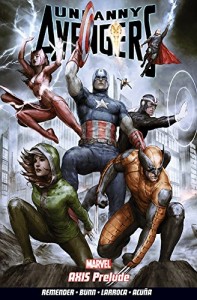 Uncanny Avengers: Axis Prelude – Rick Remender, Cullen Bunn, Salvador Larroca, Daniel Acuna & Gabriel Hernandez Walta (Marvel / Panini)
Every world changing event, has an ignition point; a tiny spark that sets things in motion. And in ‘Axis Prelude’, that spark takes the form of a certain someone with the power to control metal and who wears a helmet to stop telepaths messing with his mind. This time though, he’s not alone and is unwittingly “aided” by Havoc, the Scarlet Witch and a power syphoning mutant with a hero stuck in her head, also known as Rogue.

Magneto – along with the already mentioned members of the Uncanny Avengers – is hot on the trail of the Red Skull when he happens upon Skull’s latest nefarious scheme; one that follows the rules laid down in his first master’s playbook (the internment and incarceration of mutants in a concentration camp on the former mutant stronghold of Genosha). Having been captured when he first arrived, Magneto is freed by the Witch, Rogue and Havoc (who were also imprisoned, and then escaped from the Skull’s thrall) and having apparently gotten the upper hand in the ensuing battle with the Red Skull, reverts to type and in doing so, unleashes the Red Onslaught upon the world. And so the stage is set for ‘Axis’, the event that turns the Marvel Universe on its head, and once more finds the Avengers and X-Men at each other’s throats in a world breaking conflict that started with a single decision made in anger on a devastated island that used to be a paradise. But it’s not all doom, gloom and death on a miniscule, and then major, scale, as ‘Axis Prelude’ also includes the strange and darkly humorous tale of the Uncanny Avengers and their brothers and sisters being spirited away by a ratings obsessed director to become the unwitting stars of an extra-terrestrial “television” show that accidentally unleashes the spirit of vengeance, that’s a demon, to you and me, on its audience, forcing them to change channels when the Avengers dome to their senses step in to stop production.

“Axis Prelude” combines the storylines from both Magneto and Uncanny Avengers that feed into and trigger ‘Axis’, and while it’s not the most light hearted (which is probably the reason ‘Uncanny Avengers’ Annual was included, to alleviate the tone a little) book you’ll ever read, the plot and characterisation and artwork are hypnotically good and slowly, but surely draw you in, before hitting you with the bone crunching, knock out ending that sends you into a frenzy of got-to-know-what-happens-next-itis that inevitably delivers you (and me) into the chilling, but thrilling, embrace of ‘Axis’. It all starts here… Tim Mass Movement