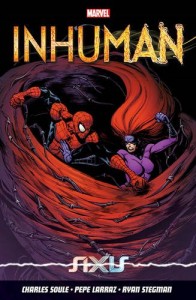 Inhuman: Axis – Charles Soule, Pepe Larraz & Ryan Stegman (Marvel / Panini)
Timing, as the Greek poet Hesiod so famously said, is everything. Unfortunately for Medusa, the events that conspire to return Blackbolt to New Attilan and bring a corporate army to its gates, take place during, and in the wake of, the ‘Axis’ affair which, as with everyone caught in its embrace, reversed her personality, setting her on a collision course with humanity. And when her city needs her the most, she’s off attempting to steal a rocket ship in order to flee to the Inhumans’ former home on the moon, having abandoned her city after telling the more than capable Gorgon that if he wants it (New Attilan that is), then he can have it. Timing, it would seem, isn’t exactly Medusa’s or the Inhumans’ (at least as far as fates dealings with them are concerned) forte.

But let’s back up a bit, because when last we set foot in New Attilan, Blackbolt was still missing and presumed dead by everyone bar Medusa. Acting on gut instinct and what she knows to be true, Medusa tasks Investigator Auran and Frank McGee, her NuHuman partner, with finding the King, and even though they finally discover what really happened to him, the path they’re forced to travel in order to find their man ends in disaster and despair. Meanwhile, having located and rescued new Inhuman Iso, Reader takes her to Ennilux, a corporation set up and run by Inhumans, but once there, has a change of heart when he realises the fate that awaits his new “ward”, and so rescues her once again, fleeing to New Attilan in order to claim sanctuary. It’s a decision that sets the corporation on a collision course that can only end one way for all concerned. Badly. Meanwhile, Medusa, suffering from the personality reversal, announces the “new direction” her people are taking in the United Nations, which in turn, sets her on a collision course with Spider-Man, before she sets her sights on her space-ship mission. Which is just about where we came in, isn’t it? Phew, it’s enough to leave you breathless isn’t it?

Which is exactly what Charles Soule’s story does, as it hits the ground running and accelerates in a web of twisting and turning, interweaving plots and tales that by themselves are intriguing and enjoyable, but when finally woven together, combine to make an incredible whole and when paired with the devastatingly beautiful and detailed art of Stegman and Larraz, makes ‘Inhuman’ just about unstoppable. Seriously folks, if you’re not reading ‘Inhuman’, then you’re missing out big time, as it’s fast becoming one of the better books in the House of Ideas stable, one that’s more than worthy of your attention, time and money. And that’s a fact Jack… Tim Mass Movement