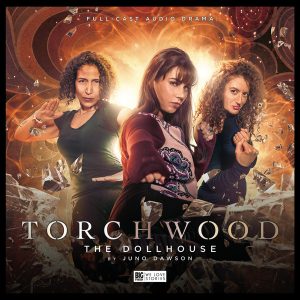 The seventies were a crazy time everywhere, but nowhere more so than Hollywood. Or at least that’s how it seems in The Dollhouse the sassy, fast moving, thrill-a-minute adventure that opens the book on the furthest enclave of the Empire’s last line of defence against extra-terrestrial and inter-dimensional threats. The Dollhouse is essentially, when you cut to the chase, a Charlies Angels pastiche that’s been given a Torchwood make-over and filtered through a surprisingly adult net. More Foxy Brown than Farrah Fawcett, it’s a tale of flying saucers in Beverley Hills, of unscrupulous talent agents, white slavery and the corruptive nature and power of the entertainment industry and the allure and danger of show-business. And it is all kinds of brightly coloured, hugely addictive, nineteen seventies style awesome. This isn’t the dull, dreary, three day week Torchwood of the decade that style forgot, this is its riff driven, big block Hemi powered muscle car driving, easy living West Coast cousin, and from curtain up until closing credits, The Dollhouse has its foot mashed firmly, and squarely, on the accelerator pedal.

Juno Dawson’s story mocks and chastises the attitudes and stereotypes of the era, pokes fun at its conventional and conservative nature and uses it’s setting as way to highlight the hypocrisy of a time that expected conformity and obedience from the masses while the rich and shameless (and the odd alien or two) indulged in ever more extreme forms of depravity.  But it’s also an entertaining, character driven, emotional rollercoaster of a drama that incorporates all sorts of sly and well-known references to the period in which it’s set into its plot and is, thanks to some pretty darn good writing from its author and high octane performances from its cast, tremendous fun. So climb aboard the soul train, set the controls for The Dollhouse and sit back, relax and enjoy the ride… Tim Cundle