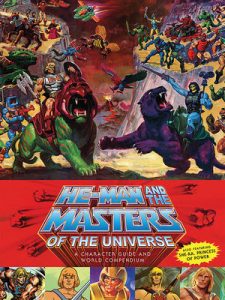 Having turned down the opportunity to work with George Lucas on some space movie in 1977, toy makers Mattel were looking to release a series of action figures. After several failed lines, they placed their bets on Conan-esque hero named He-Man and released the original Masters Of The Universe figures in 1981. They immediately captured the imagination of kids my age worldwide. In 1981 I was 4, so being the target audience I lapped up everything they could offer. Eventually, after flirting with mini comic strips and a short DC Comics run, the range became so successful, that it was developed into a cartoon series, which is still watched and enjoyed today.

This compendium is an in depth look at every character from the He-Man and She-Ra universe, including their fictional back story and the factual story about their creation. With over four thousand entries, every character is also given a rundown of their abilities, in a Top Trumps kind of style. Everything you could possibly need to know about its characters, beasts, vehicles, locations and magic is here, in the most comprehensive guide to the Masters of The Universe, uh universe ever put together.

As a child of the 80’s this is pure indulgence for me, as I’m sure it will be for many other people of a certain vintage. Beautifully put together with gorgeous colour photos throughout, this is a must have for any fantasy/sci-fi fan. I feel the need the end this review with an inspirational message from He-Man or Orko, as per the cartoon. Instead, I’ll leave you with a simple BUY THIS BOOK NOW... Chris Andrews