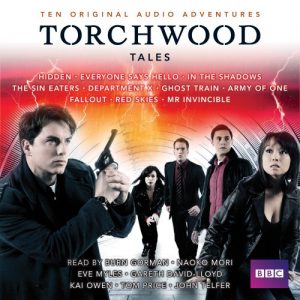 This latest box set from BBC worldwide consists of the ten original Torchwood audio adventures that were released while the show was originally broadcast, and just after it finished its run, on television. Together for the first time, you can now enjoy these stories that span the series entire duration in either tortoise or hare fashion, That is, in a caffeine fuelled Captain Jack and company marathon, or at a more leisurely pace over an extended period of time.  Read by various members of the cast the stories range from the outright macabre to hardcore sci-fi, and each one bears the Harkness stamp of approval.

The set comprises of Hidden, Everyone says Hello! In the Shadows, The Sin Eaters, Department X, Ghost Train, Army of One, Fallout, Red Skies and Mr Invincible and the tales are wide and varied, covering everything from mad Vicar’s in The Sin Eaters to a completely insane department store in Department X and after listening to the latter, you can imagine yourself giving the Hayes in Cardiff a VERY wide berth. For me though, the standout story is Everyone says Hello which features the original Torchwood team and is brilliantly read by Burn Gorman. Everyone says Hello is the story  of a strange alien being that has brought Cardiff to a standstill and the residents of Wales’ capital all seem intent on telling their life stories to anyone who just happens to be passing by and it’s both thrilling and blackly comedic. The rest of the yarns in this set are no slouches either, as each is read with enthusiasm and vigour by whichever cast member takes the lead.

The downside of listening to this box set is that you really do start to miss the TV show and wonder if, or when, it will ever return to our screens. Fingers crossed it does, as these stories just go to show that the BBC are missing a trick by not making any more Torchwood, as it was, and is, a funny, sexy, smart, anything goes, kind of show. Whether it’s tramping through the rain in Cardiff or a high speed car chase in the USA, Torchwood was fantastic and every story in this collection is a perfect illustration of its wide ranging scope, its ability to tell a good tale and its incredible combination of drama and characterisation. So, remind yourself how good things used to be, do yourself a gigantic favour and pick this box set as soon as you can. Then relax and enjoy a trip back to the good old days with Torchwood…  Nath Rixon.