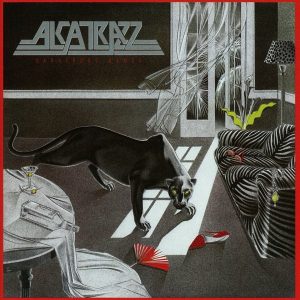 Arriving in the mid-eighties at the height of hair metal glory, former Rainbow singer Graham Bonnet’s Alcatrazz made a hefty impact on the scene at the time. Dangerous Games the band’s third release, sees the charismatic frontman’s band venture into more commercial waters, and unfortunately lacks a stand out track like Hiroshima Mon Amour (from their No Parole From Rock ‘n’ Roll debut opus) or the wildly frantic fretboard ferocity of God Blessed Video (from Disturbing The Peace) – so maybe that’s why the eleven tracks on here were to be the swansong from what should, and could, have been a much greater contender. Guitarist Danny Johnson does the band real justice as following in the footsteps of both Malmsteen and Steve Vai (who left to perform with Dave Lee Roth) is no easy feat. The likes of Undercover and the infectiously groovy album title track bode well, but the entirety of the record just doesn’t seem to pack the punch of either of their previous releases, but having said that, Dangerous Games is by no means a weak record. As usual with a HNE release, there are plenty of bonus tracks (this time an eight track live recording from NYC in 1986) and a sizable booklet crammed with liner notes and pictures. For Graham Bonnet fans and those with a penchant for eighties rock, Dangerous Games is a must have record. Mark Freebase