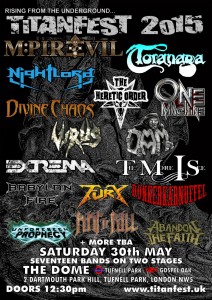 TITANFEST 2015 – which will take place on Saturday May 30 – has just announced three more additions to its already stacked line-up.

London’s The Heretic Order and Past The Fall are joined by Italians Extrema – who will be playing their first ever UK show – at the heavy metal all-day extravaganza. The event will be taking over the sister venues of The Dome and Boston Music Room, in Tufnell Park London.

Already announced for the inaugural edition of the festival are headliners M:Pire of Evil, plus Abandon The Faith, Babylon Fire, D.A.M, Divine Chaos, Donkerkarnuffel, Fury, Nightlord, One Machine, The More I See, Toranaga, Unforeseen Prophecy and Virus.

TITANFEST derives its name from THE UNDERGROUND TITANS TOUR ’92, a UK tour of underground metal bands working together with a common goal – to bring the best in metal to those who appreciate it the most, and nobody appreciates it more than you: the dedicated die-hard Metal fans.

That idea holds just as true today as ever it did, as TITANFEST now sees some of the most respected and time-hardened metal musicians working side by side with the next generation of the emerging UK metal scene.

Tickets are priced at £20 and are available HERE. Doors will be at 12.30pm and after the bands finish, there will be DJs until 3am.