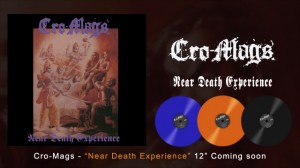 CRO-MAGS – NEAR DEATH EXPERIENCE 12″ finally available soon after 22 years again!
Near Death Experience is the fourth album by New York legends, Cro-Mags. Formerly released in 1993 on Century Media Records. It is, to date, the last album to feature vocalist John Joseph after which the group finally disbanded. Cro-Mags are one of the most important Hardcore Punk bands turned out from the legendary New York City.