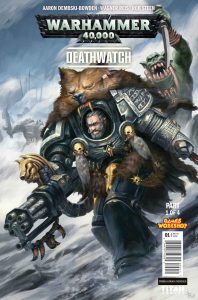 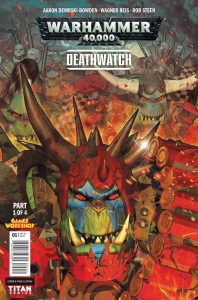 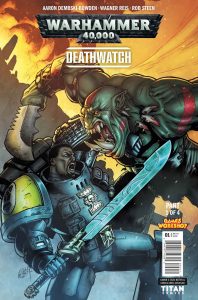 Titan Comics’ new Deathwatch series is based on the best-selling standalone Games Workshop boardgame. As well as inspiring dozens of Black Library novels, the Deathwatch property has found success in other mediums including a new PS4 videogame (released in 2017), and Deathwatch: Tyranid Invasion, a turn-based strategy videogame, available on iOS and Steam. For more information, visit rodeogames.co.uk/deathwatch.

In Titan Comics’ Warhammer 40,000: Deathwatch Issue #1, the Deathwatch team are the best of the best from all Chapters of Space Marines – they alone have the strength of mind and body to battle the alien across the universe, defending humanity from the Xenos that would destroy them!

Faced with the destruction of an entire sector, and assailed by hordes of Orks, can the Deathwatch strike team hold the line against impossible odds?

Warhammer 40,000: Deathwatch Issue #1 will be available to order from the upcoming November edition of Diamond Previews catalogue and comes with three stunning covers to collect including Ørjan Svendsen (Blood Bowl), Fabio Listrani (Dawn of War III), and Tazio Bettin (Warhammer 40,000: Will of Iron).