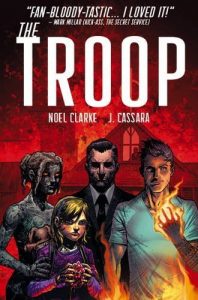 Youngsters who are discovering that they are blessed with all manner of super duper powers ganging up to form an ensemble of disparate but terrific teens is not exactly news in the world of comics these days. On top of X Men and Fantastic Four in the world of the comic book cinema, we also have the likes of Percy Jackson, Miss Peregrine and Harry Bloody Potter all aimed at the teen market but how about a similar sort of thing with a grimmer and nastier edge to it? That sounds more up my street and from the off, Noel Clarke – yes him off of the telly and films and stuff – has come up with just that. More in keeping with the likes of Black Science than The Legion of Superheroes, there’s swearing and shagging and violence aplenty. Merciless bullet-through-the-head- exploding-skulls and everything.  Good start. Assuming this is number one in a series that will continue to bloom, we have something of an origin story for the afore mentioned disparate teens who are all coming to terms with their burgeoning awesome abilities. A group of shady characters launch an assault on a remote Australian house massacring anyone in the way and attempting to catch a girl who can, erm, turn to stone or something. Another shady dude arrives via some sort of teleportation and, just as the helicopters appear, magically whisks her off to a life of luxury and as the years pass, his bed. There are others like her to be saved and the shady organisation with helicopters and big guns and what have you, are racing to capture them first. As this weren’t mayhem enough, there’s also a band of souped up Robocop types working on behalf of some pseudo religious sect hell bent on exterminating or rag tag collection of super bairns. Crikey.

It’s a whistle stop tour de force of recruitment and ruckus before we establish The Troop as an entity. Holed up in a house with Edwards, their mentor and his “secret room”, who they are and what’s going on is slowly revealed – or not – and it all builds to a rousing finale. There’s more kids just like us so let’s go get ‘em! It’s a promising start I must say. Although rather generic in the story arc, there’s enough grit and grime to avoid comparisons with the clean cut super teams of DC or Marvel and although, again, some of the powers are not exactly original – a lad who is able to “flame up”, a lass who can turn to water – there are a good few novel ideas chucked in the mixer. The young lass who can give you any disease she knows about through a simple touch is a nice grisly addition to the mysterious mob. The trick with this sort of ensemble tale is to fully flesh out all of the characters and not do so at the expense of the action. The breathtaking opening salvo has succeeded with this so count me in to see if the breathless pace can be kept up with. Promising. Marv Gadgie