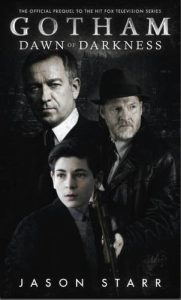 There’s a knack to writing tie-in novels – and I’ve written a few – that has little to do with how well you can write and everything to do with how well you can listen. The most important thing needed when playing in someone else’s sandpit isn’t a knock-em-dead story or ball-busting Big Bad; what’s needed is a good ear – an ear for dialogue, speech pattern, conversational metre … the way these particular people speak. Get your characters talking the source characters’ talk and you transport your readers back into their world. Done badly, you’re scuppered; done well, it’s just like finding a lost episode.

Happy to report, then, that Jason Starr has the ear. Very early in this prequel to Gotham the series he captures Sean Pertwee’s Alfred Pennyworth with a couple of deft strokes of his pen. There’s an exchange between Alfred and Thomas Wayne where suddenly Pertwee is standing before you, fully-fleshed, and yes, it brings a smile to your face. He nails Harvey Bullock, too, and Ed Nigma and Oswald Cobblepot, albeit it the latter to lesser degrees, though only because their appearances are cameos, as befits the book. Where Starr’s real challenge comes is in his treatment of Thomas and Martha Wayne, who, in most Bat-scenarios, after all, have little chance to contribute anything than an urk! and a splat and a shower of bouncing pearls. Here, though, they’re still very much alive, and Starr weaves a convincing couple – human and flawed – no more so than when we’re privy to a bedroom argument between the two, Martha convinced that Thomas is having an affair.

But what of the story? Clearly nothing too Gotham-shaking can happen – it’s a prequel, yes – but Starr builds a sound foundation around the repercussions of Thomas’s ill-advised involvement in the Pinewood Farms biological experiments. We meet further familiar faces along the way – tread paths that Bruce and Alfred and Jim will later tread – and the whole thing dove-tails neatly into season one. If there is a quibble, it’s that Bruce seems a little too mature at this point, Oswald Cobblepot more a player than he should be, but this is minor moaning, and should probably be ignored.

If you’re suffering from yet another mid-season break – or worse, between seasons – you could do far worse than pick up Dawn of Darkness. It is that lost episode. Mike Wild