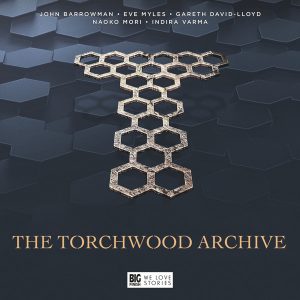 Apparently, the Doctor isn’t the Universe’s only eternal champion in the fight against the ever pervasive forces of darkness. Torchwood, are also in the conflict against good and evil for the long haul, which, given Jack Harkness’ immortality, shouldn’t really come as a shock to anyone; but it’s always nice to have your nagging suspicions and not-so-crazy-after-all fan theories confirmed in, and by, canon and mythology. The Torchwood Archive is set in far future when humanity is locked into a centuries old war with the Enemy, one in Torchwood and the Committee have become the stuff of legend and folklore. Dispatched to the long forgotten Torchwood Archive to destroy and prevent it falling into enemy hands by his boss (who bears a more than passing resemblance to the longest standing employee of Queen Victoria’s last line of defence against extra-terrestrial threats and menaces), Jeremiah has to start believing in what he thought where fairy stories, cut short his honeymoon and blown up a secret base located deep inside mankind’s oldest foes galactic territory. It’s not exactly the best day he’s ever had; and in true Torchwood fashion, just when he thinks things can’t get any worse, they inevitably do as his job and his duty become hopelessly intertwined in the machinations of the adversarial organisations he thought were long dead.

James Goss’s fantastic story of fabled objects and the history of the never ending battle between Torchwood and the Committee is packed full of incredible performances, detailed characterisation and more twists and turns than the combined output of Hitchcock and Shyamalan. Rich in dialogue, design and structure, The Torchwood Archive opens a myriad of nearly endless possibility for the series continuation, while at the same time brings it all full circle and to a definitive and satisfying close. Which may seem odd, but remember, time is fluid and the future isn’t set in stone, at least it isn’t as long as Torchwood has anything to say, or do, about it. The cast, much like the author, are on top of their game throughout, and as such it’s nearly impossible to fixate on, or single out any individual member, but the interaction between Tom Price, Richie Campbell and Rowena Cooper is extraordinary and keeps the drama’s magnificent heart beating at full tilt. The twenty first century may well be when everything changes, but this is where the story really begins… Tim Cundle