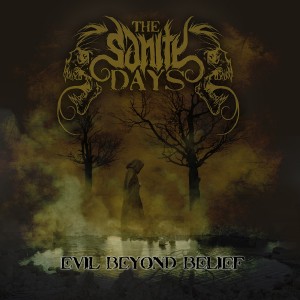 The Sanity Days – Evil Beyond Belief CD (Candlelight)
So an ex-Onslaught project, that sounds exactly like ‘In Search Of Sanity’ era Onslaught, and comprises of (you got it) ex-Onslaught members; not a bad thing really. Steve Grimmett’s voice distinguishes the sound, as it did on the above said album, he is a vocalist of distinct prowess – smooth and clear tones projected with power, lovers of old school metal will really dig ‘Evil Beyond Belief’. It has its moments of thrash riffings during ‘Charlie’ and ‘Firestorm’, but on the whole it’s a very mid paced record. Most of the songs are lengthy and create an epic, unrushed experience to the entire listening, there is a very classic feel especially bought to light during ‘Ruler Of Eternity’. This album is all about Steve Grimmett, he channels the sound, and it’s also great to hear him carry on with the style he is renowned for, instead of opting for a more trend filled approach. Solid metal. Mark Freebase