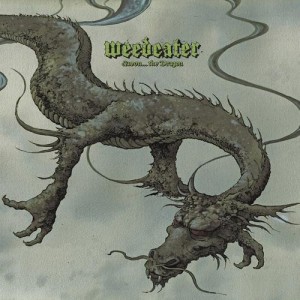 Weedeater – Jason… The Dragon CD (Season Of Mist)
Originally released in 2011, and the fourth and final re-release from the North Carolina bands back-catalogue (before we are treated to a new Weedeater record!) ‘Jason… The Dragon’ pleasingly serves up a plethora of down tuned feedback frenzy fans will already of become accustomed to. Opening track ‘The Great Unfurling’ graciously sucks you into a vortex of nastiness, delightfully groove-ridden, almost disgustingly distasteful… but that’s what this music is all about, right? Their Southern sling on what can only be described as extremely heavy and an exhilarating blend of stoner, fuzz infused crust gives them an edge of originality and a personal identity from so many in the hipster popular clan. With a bass sound that is so weighty, and thunderously heavy-duty drums it sure is a concoction of imposing decadence. The change in tempos demonstrated during the faster paced ‘Mancoon’, the demonically doomed ‘Long Gone’ or even the ridiculously hillbilly sounds of ‘Palms And Opium’ derives an album of weed metal delights keeping significance in content throughout. A band that is sure to steal the ‘hot spot’ at Temples Festival 2015. Mark Freebase