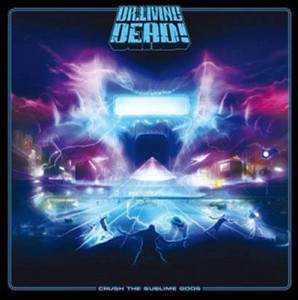 Dr. Living Dead! – Crush The Sublime Gods (Century Media)
The Doctors of cross­over are back, with their third and arguably their best album to date. Signing with Century Media for ‘Crush The Sublime Gods’ gave these Swedes the opportunity to bring their riffs even closer to Suicidal Tendencies than before, and with that it’s especially reminiscent of ‘How Will I Love Tomorrow’ and ‘Lights Camera… Revolution’. ST are all about the ‘Surf and Slam’ but what about the mosh, which is deeply rooted throughout ‘Crush The Sublime Gods’? We’d have to thank early Anthrax and SOD for that. Riff after riff deliver said mosh at crazy speeds interspersed with groovy parts. The whole record is well­-balanced when compared to ‘Radioactive Intervention’ (2012) and this is largely due to the crisp production. I’m not entirely sure how many waves of thrash we’ve had since the early 80s, but Dr. Living Dead caught it at the right time and are riding it with pride. Martijn Welzen

Dr Living Dead! – Crush The Sublime Gods CD (Century Media)
A superb portion of old school thrash… with hints of Suicidal Tendencies, early Anthrax and splatterings of crossover speed. Pretty perfect I’d say. DR. LIVING DEAD! will make you skank like a demon for sure, and the pace of ‘TEAMxDEADx’ may even cause you to try a sneaky stage dive towards the sofa, it’s a breathe of fresh air in a predictable music scene, and a trip down nostalgia boulevard for old-schoolers like myself. With an opening intro oozing quality thrash credentials followed by the chugga-chugga riff of ‘Crush The Sublime Gods’ you can hear from the very start this will be an album of intensities. It’s only really when ‘Salvation’ gently erodes the speakers that the pace slows down. ‘Triggerkiller’ boasts a riff that Scott Ian wishes he still churned out whilst the zombified facade of ‘Wake Up… Join The Dead!’ cleverly closes the album leaving you with one more circle pit frenzy before the intricate guitar work fades away. I seriously can’t remember the last time Suicidal Tendencies or Anthrax released an album this good! Mark Freebase