Warning: preg_match() expects parameter 2 to be string, object given in /var/www/vip4/sites/vip6102689/httpd/htdocs/wp-includes/formatting.php on line 4866
 The Sand - Mass Movement
x
Spread the love 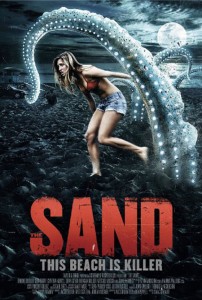 The Sand (Icon / Frightfest Presents…)
Don’t ask me how a film about a killer beach works so well, especially when boasting CGI effects this bad, but it does! Primarily thanks to some skilful direction and editing and some spirited performances that make you actually care – a little bit, anyway! – about the characters. The plot, for what it’s worth, sees a group of hungover horny teenagers wake up after a beach party the night before, during which one of their number dragged a big slimy egg out of the waves and up to their campfire. It quickly becomes apparent that there’s now something wrong with the beach, and any contact of bare skin on sand ends horribly for whoever is stupid/brave/clumsy (delete as applicable, as the film has examples of all three) enough to step on it. The thing is, four of the teens are trapped in a car parked on the sand, two more are trapped in a lifeguard’s hut, one wakes up on a bench, and one wakes up stuck in a barrel – with a penis drawn on his face. Cue various attempts to get off the beach to safety without touching the sand, otherwise you get sucked down and disintegrate in a cloud of horribly realised CGI gore. And when you finally see the creature that’s lurking under the sand during the half-baked finale, you wish they’d left it to the imagination, because they really should have kept a bit more money back for the effects. Oh well, despite the obvious shortcomings of its budget, The Sand works remarkably well in a knock-off Tremors sorta way, and you can’t help but get in the swing of it when it’s been put together with such enthusiasm and verve. Ian Glasper