Iowa will always be associated with Nu-Metal noise mongers Slipknot, but things may well take a change for the better as Sioux City heavy hitters For Today are going to prove. After a lengthy trip back from down-under (Australia), vocalist Mattie Montgomery was able to have a brief chat…
Words: Mark Freebase

MM: To start things off, for those who may not of come across the band before, can you tell us a little about For Today’s background?
Mattie: Well, we’re a metalcore band from the USA. We’ve been together for about 8 years and we’re heavy. Really heavy!

MM: So how has the band evolved over its previous releases, and what’s been added to the course of making ‘Wake’?
Mattie: On some of our previous albums, I think we wrote songs that catered to what people have come to expect from For Today. On ‘Wake’ we very intentionally set ourselves to write outside the box—to ignore what people expect from us, and to write an authentic expression of what’s really inside us, and what we’re really passionate about. So, both musically and lyrically, this album is a lot darker and more emotional and heavy. 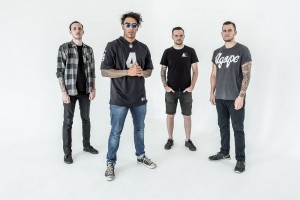 MM: The connection with Nuclear Blast… how did it happen?
Mattie: We had a number of offers from labels all around the world, but NB is an incredible label who has done GREAT work for many of its bands. We were very excited to get that offer, and it wasn’t one we could turn down!

MM: Was it an easy transition for you guys to make?
Mattie: Oh yeah. Very easy!

MM: Does being on a ‘big’ metal label change the way the band thinks, and operates now?
Mattie: No, not at all. We love Nuclear Blast, but this doesn’t really change anything about the way we do things… Except that now, hopefully, more people will be listening! [laughs]

MM: Did the way you set about creating ‘Wake’ become influenced due to the position?
Mattie: We had actually already written and recorded WAKE before we signed to the label! [laughs again]. That’s good for us, and shows we did it for ourselves. 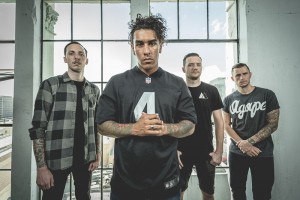 MM: How would you sum up the contents of your new album, for you guys, as musicians?
Mattie: I think, if I had to describe it, I would say that Wake is much darker than anything we’ve ever done. Both musically and lyrically, the album is really emotional and intense. I think anyone who likes heavy music will find something about this album that they like and are able to relate to.

MM: What does the artwork symbolize?
Mattie: The conflict between light and darkness – good and evil.

MM: What ethics and beliefs does For Today air?
Mattie: I don’t know if a band’s ethical standard is public business… but, we are Christians and we’ve all had our lives changed by the power of the blood of Jesus.

MM: So how would you like people to perceive the band?
Mattie: I hope people, whether they’re Christians or not, are able to see us as a band that plays music they love to listen to, and concerts that are fun to watch. Our faith isn’t something we hold in high regard intending to offend or alienate people, but it’s not something we’re willing to compromise or apologize for either. I just hope that, even if people don’t share our beliefs, they can respect our music and let it to bring us together.

MM: What’s the plans to hit European shores?
Mattie: We don’t have anything confirmed yet, but we’re working very hard to get out there in early 2016!