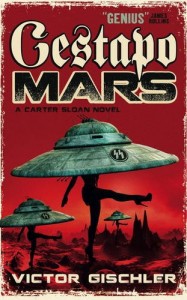 Gestapo Mars – Victor Gischler (Titan Books)
From the moment I first saw it, I knew I was going to love this book. I mean, come on, how could I not? With a cover featuring flying saucers goose stepping (in high heels and stockings) across the surface of Mars, and as much I hate Nazi’s and Fascism, which is a whole lot more than the average bear does Boo-Boo, I was sold on it before I’d even glanced at the cover blurb. And then I started reading it, and every single expectation, thought and idea that I had about it instantly disappeared. Because no matter how good I thought it was going to be, ‘Gestapo Mars’ is, better. Much better. Much, much better. Destined to become a cult classic, it’s one of those books that are whispered about in hushed, excited tones by the clued-in, switched on cats who’ve read it, while those who haven’t are destined to remain lost, confused and lonely for all eternity. Alright, you got me, maybe I’m exaggerating a little (just, you know, a smidgeon, journalistic licence and all that) and maybe you won’t spend your life alone if you don’t read it. Maybe. That said though, and even though I was probably exaggerating just a teensy-bit, ‘Gestapo Mars’ has smashed its way into my top ten books of the year with a bullet. Yeah, it really is that good.

Set in the far future of an alternate reality, we learn that the Third Reich both won the Second World War and (whilst ruling humanity with an iron fist) has taken mankind to the furthest corners of the galaxy and beyond. ‘Gestapo Mars’ is a tale of intergalactic espionage, rebellion, atonement, alien invasion and gratuitous sex and violence. After being woken from more than two centuries in suspended amination, problem solving, super-agent Carter Sloane is sent on a top secret mission by his Nazi overlords, a mission vital to the survival of the Reich. But Carter’s mission isn’t quite as straight forward as he thought. Wide spread rebellion and dissent engulfing the empire and the threat of humanity being subsumed by extra-terrestrial jellies is throwing his masters into turmoil. What’s more, everyone around him seemingly wants him to die for the Reich or because he’s a part of it, so Carter realises that if he’s going to stand any chance of living through his mission, he has to play all sides off each other, keep his head down and hope for a miracle. Betrayed, sent to die and left with nothing but his training, Carter Sloan is going to save the Reich, whether they want him to or not.

Victor Gischler’s novel is a high tempo, furiously funny, satirical, good old fashioned pulp adventure that hits you like a stolen, runaway freight train driven, and crewed, by an amphetamine fuelled Philip K. Dick and his partners in crime Harry Harrison and Douglas Adams. Packed full of subversive, dark humour that ridicules bureaucracy and government, ‘Gestapo Mars’ is a roller-coaster ride through a strange and twisted future that as ridiculous as it is frightening, illustrating the futility and ridiculous nature of the “systems” that we shackle ourselves to. After all, the “system’ may change and it’s facets may wear different guises, but the “machine” known as society never does, it just keeps grinding on and on until the bitter end. This funnily enough, is the same bitter end that Carter Sloan seems destined to prevent, no matter how hard he tries not to. And talking of Carter Sloan, Gischler’s only gone and created one of the greatest noir-inspired anti-hero’s to have ever fired a blaster and stolen a space-yacht. More Jim DiGriz than Jason Bourne or James Bond, Sloan is the man who doesn’t want to save anyone except himself, but is a victim of his own genetics and biological programming and always seems to the be in the wrong place at the wrong time. Or the right place at the right time, depending on your point of view. Weird, wonderful and more than a little bizarre, ‘Gestapo Mars’ is an oddball, unforgettable, thrill-packed page turner that leaves you begging for more. In fact, my only real criticism, the one bugbear that just won’t stop stomping away in my brain whenever I think about this book is that it’s too damn short. It’s all over too quickly. Still, I guess that means I can go back and read it again. And again and again and again. Carter Sloan, we need you… Tim Mass Movement