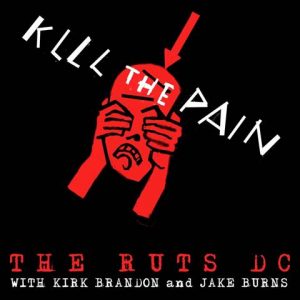 Following hot on the heels of last year’s critically acclaimed new album ‘Music Must Destroy’, voted ‘Album Of The Year’ by Vive Le Rock magazine, The Ruts DC are gearing up to take 2017 by storm with a new digital single ‘Kill The Pain’, released March 3rd via Westworld/Sosumi Recordings (alongside a previously unreleased instrumental version), before hitting the road with The Stranglers throughout March and early April.

Lifted from ‘Music Must Destroy’, the band’s first new rock recordings since 1981, new single and video ‘Kill The Pain’ features backing vocals from Stiff Little Fingers frontman Jake Burns and Spear Of Destiny/Theatre Of Hate frontman Kirk Brandon. Having successfully toured together as the ever evolving Dead Men Walking acoustic tour, it was the perfect opportunity to feature the iconic frontmen on the single.

“One of the many highlights of last year was hooking up with Jake and Kirk to do some Dead Men Walking acoustic shows,” explains bassist and vocalist Segs. “Four veterans in one van, how would that go?! In between singing we didn’t stop talking and laughing. It just felt right to have them sing on the single. What with The Stranglers tour coming up, 2017 looks like another exciting year for The Ruts DC.”

Catch The Ruts DC on tour with The Stranglers throughout March/April at the following dates:

Pre-order ‘Kill The Pain’ on the following links: