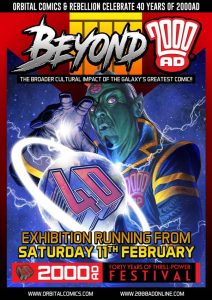 A special exhibition that charts the phenomenal influence of 2000 AD on global pop culture is to open in London next month.

BEYOND 2000 AD: The Wider Cultural Impact Of The Galaxy’s Greatest Comic exhibition opens at the UK’s only Eisner Award-winning comic store, Orbital Comics & Gallery, on 11th February as part of 2000 AD’s 40 Years Of Thrill-power Festival.

Beyond 2000 AD will focus on the unprecedented artistic importance of the UK’s finest comic book export on this landmark anniversary.

Mounted in association with 2000 AD, this two-week exhibition celebrates four decades of the legacy of the Galaxy’s Greatest Comic on the world’s pop culture consciousness and its inspiring effect on world-renowned musicians, movie makers, gamers, and sculptors.

Featuring a curated display of cultural artefacts including artwork, statues, vinyl records, clothing, and more, the exhibition glorifies and draws from the sensational and controversial history of the landmark British comic.

From year zero to the cinema multiplex, from Fleet Street to the Cursed Earth – Beyond 2000 AD has something for everyone from die-hard Deca Thargos to fresh Squaxx Dek Thargos, from history nuts and to pop culture aficionados!

This is just one of several satellite events taking place around 2000 AD’s 40th birthday in February. The 40 Years of Thrill-power Festival is the sold-out event taking place on 11th February in London to mark four decades of British comics’ greatest export.

As well as the one-day convention in Hammersmith with more than 100 creator guests from the past 40 years, 2000 AD is organising a series of events to celebrate this landmark – events already announced include a special life drawing event on 5th February and two exhibitions of original artwork in London and Margate.

First published in February 1977, 2000 AD is the legendary weekly British anthology comic and home of Judge Dredd, as well as a galaxy of original sci-fi, fantasy, and horror action stars. As well as producing innovative and provocative comics for almost 40 years, it has brought the industry some of its biggest talents, from Alan Moore, Grant Morrison, and Mark Millar, to Jock, Brian Bolland, Dave Gibbons, and many more. Published in print and digital every Wednesday, 2000 AD is the Galaxy’s Greatest Comic and remains at the industry’s cutting edge.