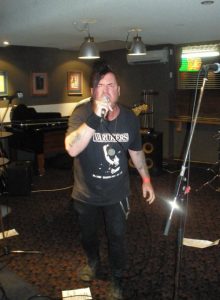 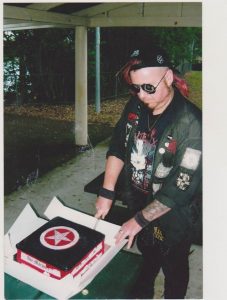 Well the point of no return for me came at the tender age of eleven when I discovered punk rock.  It would go on to shape my life, develop my character and subsequently make me the person I am today. From fronting my own band, my involvement in the Australian hardcore scene to documenting it all in my recently published book Thirty Years Of Anger.

It all began in the scruffy northern English mill town of Dewsbury. Prior to punk me and my mates listened to any old shit the industry churned out or what we saw on Top of the Pops. But once we heard the likes of the Sex Pistols, The Damned, U.K. Subs and The Clash that was it. Of course we were a little too young to fully comprehend the message behind punk but what we did understand that it was raw, for real and had serious attitude.  Every weekend we’d head into town and pick up the latest releases from the aforementioned bands and whatever else we could find. We also began to sport the look – spiky hair, leather jackets with badges and Doc Martens. For me there was no turning back. It was never going to be a ‘passing phase’ but a way of life.

However I was about to leave all this behind in February 1980 when my family immigrated to Australia. To say that I experienced something of a culture shock when I arrived in Brisbane would be an understatement. The heat and humidity hit me like a brick and the Australian music scene was utter shit. I couldn’t find any record stores that stocked the bands I liked. It was all American contemporary rock or pop shite that dominated the Australian charts.  Also I thought all the kids here were right little dickheads. They all acted like they were four or five years old and didn’t get up to any of the mischief we did back home.  Unbeknownst to me there was a punk scene in Brisbane in the form of bands such as The Saints, Razar, The Leftovers and V2 and the Hiltons . But I was far too young to be a part of that so I became a ‘normal’ kid again for a while.

Just before I  was about to start high school I discovered a record store called Rocking Horse in the Brisbane CBD which was an import specialist . It stocked all the bands I listened to back home and more. I couldn’t believe it! I would also pick up magazines such as NME and Melody Maker even though they were a few months behind it kept me up to date with what was going on. I saw that there was a second wave of punk happening with new bands coming out of the economic nightmare that was Thatcher’s Britain. Bands like The Exploited, Discharge and Anti- Pasti . These bands were a lot more faster and angrier than their predecessors and also sported a more defiant look with twelve inch Mohicans , spiky hair and multi-studded jackets . Something new was happening and it was exciting! It wasn’t long before I met other like-minded individuals in high school who could appreciate the same kind of music and again we began to sport the look. We’d get shit from our parents, teachers and other wankers at school but we held our own. When school was finished I would go on to play an integral part in the Brisbane punk scene earning the nickname ‘ Marky Hardcore’ . We’d correspond and network with scenes in Sydney and Melbourne through fanzines and organise tours. Taking road trips up and down the east coast of Australia meeting all sorts of interesting characters and getting up to all kinds of drunken debauchery.  I would become one of the major players in the Australian scene fronting my own band Anger In Motion . This has been a brief synopsis. For the full story read the book – Thirty Years Of Anger  – One Man’s Journey Through The Australian Underground Hardcore Punk And Extreme Metal Scenes … 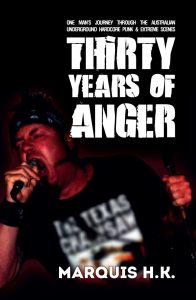 Marquis H.K.  is a straight-down-the-line, old-school punk who believes in keeping it real. From his “devil’s lock” and aviator sunglasses to the military boots and crusty-punk patchwork shirt, Marquis continues to personify the movement that changed and shaped his life over the past three decades.

Now in his mid-forties, Marquis is the former front man of Brisbane hardcore punk band Anger in Motion, which recorded two EPs and a retrospective album in 2005, and toured interstate and in the UK. He has managed bands, and organised tours and clubs across the punk, thrash, grind and metal genres since the 1990s.

Known within the underground music scene as Marky Hardcore, the author  goes by the name Marquis HK when representing the Church of Satan, in which he is a Warlock. In this capacity, Marquis has been interviewed on ABC radio, The Project and in the Sydney Morning Herald, plus Ante Sydney Street Press, Old Nick, and Black magazines, among others.

Marquis’s other passions include comics, horror movies and travel.