Warning: preg_match() expects parameter 2 to be string, object given in /var/www/vip4/sites/vip6102689/httpd/htdocs/wp-includes/formatting.php on line 4866
 The Rise and Falls of Pritchard and Dainton - Mass Movement
x
Spread the love 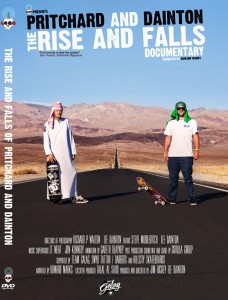 The Rise and Falls of Pritchard and Dainton (Goon / Team Galaxy / Kill City Skateboards www.pritchardvsdainton.com) *
Named after a particularly lurid sexual act, ‘Dirty Sanchez’, was (oh, like you didn’t know…) a semi-psychotic show that catalogued the sadistic humour and masochistic acts of self-abuse perpetrated on each other ,and themselves, by loveable South Wales lunatics Michael ‘Pancho’ Locke, Lee Dainton, Matthew Pritchard and solitary Englishman Dan Joyce and it was a cultural phenomenon during the first decade of the twenty first century. It made super-stars of its willing and eager participants, spawned an internationally successful film and was the most successful program ever produced by MTV Europe. And it was also balls out, piss your pants funny. But like all good things, it eventually came to an end, and ‘The Rise and Falls of Pritchard and Dainton’ documents not only where it all started and how it began, but what happened, and is still happening, to the main driving force, and instigators, behind the smiles, the humiliation and the bone shattering joy, Matthew Pritchard and Lee Dainton after the cameras stopped rolling.

If it hadn’t been for the anti-hero’s of this documentary, there wouldn’t have been a ‘Dirty Sanchez’ and the world would have been devoid of the laughter that their urine drinking, faeces splattering, how-much-hurt-can-you-take antics created. Brought together through a mutual love of skating, Dainton and Pritchard soon discovered that they were rather good at their four wheeled obsession and started making skate video’s with the aid of a few friends, but their movies were a little different to the usual Bones Brigade and Thrasher inspired titles, and pretty soon the tomfoolery became as much a part of the product as the tricks they were performing on their boards. And when the much hyped and anticipated film, (and blueprint for what would eventually become ‘Dirty Sanchez’) ‘Pritchard Vs. Dainton’ finally arrived, everything exploded. Their worlds were turned upside down, and the skatehounds from South Wales who just liked having a laugh, along with a couple of their friends, were catapulted into the limelight and onto a non-stop rollercoaster of blood, pain, laughter, drugs, debauchery, suffering, drink and mayhem. Which let’s face it, isn’t a bad way to earn a living; and is documented in warts and all glory in this brutally honest film that refuses to pull any punches or pander to the weak willed or easily offended.

‘The Rise and Falls…’, like everything this dynamic (and probably soon to be bionic) duo do , is a full on, no holds barred examination and exploration of what it is that that makes them tick and the intense friendship and rivalry that fuels their relationship and everything that they do. It’s a film that continually poses, and tries to find an answer to, the question, ‘Why do it?’ although it never seems to find a definitive answer (apart from the inevitable ‘Why not?’ and ‘because it’s funny’), but it doesn’t need to. Because they, we and anyone and everyone who has ever watched them, don’t want that question answered. They, and we, don’t care. They, along with some of the folks who were there for the ride, including Phil Campbell (who tells a hilariously funny story involving Stuart Cable and the famous Stevie Nicks urban legend), tell it exactly how it was, is and always will be, and we wouldn’t want it any other way. The boys done good… Tim Mass Movement

*If you’re easily offended, have a heart condition, suffer from panic attacks or feel the need to vomit when watching grown men playing with excrement and bodily fluids, then you know, maybe this isn’t the flick for you. Try something a little more sedate, like the uncut versions of ‘A Serbian Film’ or ‘Nekromantik’, or even, if you’re feeling really brave ‘It’s A Knockout’…