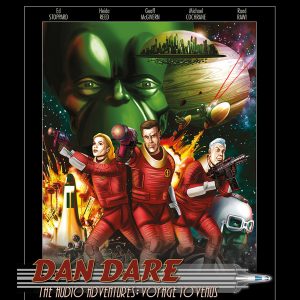 “My first introduction to Dan Dare was at the age of nine through the pages of the legendary comic 2000AD. He was the pilot of the future and artist Bellardinelli brought to life a whole new world that I was previously unaware of. Dan Dare quickly became one of my favourite comic strips and I missed the character terribly when his adventures came in an end after two years of fighting the Mekon and the Star Slayers. Now I have the chance to be a kid again — as B7 Media and Big Finish Productions brings to life one of the UK greatest comic book heroes, but this time as full cast audio productions. I can’t wait!”

Big Finish Executive Producer Nicholas Briggs— who also has a role in the stories – adds: “We’re delighted to be releasing Dan Dare: Pilot of the Future on the Big Finish site. I’ve been a massive fan of Dan Dare for years. The way B7 have reinvented it is spot on. They’ve lovingly nurtured the spirit of the original to create something new and exciting that still manages to stay thoroughly faithful to all the beauty of the original. I would have loved to have played the Mekon, so, rather fittingly, I got to play an alien who really wanted to be the Mekon!”

B7 Media Producer and Director Andrew Mark Sewell observes: “Ever since my father first introduced me to Dan Dare I’ve been captivated by his space adventures – so brilliantly realised by the creative genius that was Frank Hampson. It also ignited my fascination with mankind’s quest to journey beyond our blue planet and explore strange new alien worlds. With the world of film and television drama now seemingly dominated by American comic book heroes, Dan Dare has always stood out as the definitive ‘British’ comic book space hero — a bright light of optimism that captured the hearts and imagination of a generation. The opportunity to realise Dan Dare for audio, and to partner once more with Big Finish, was an opportunity too great to turn down. Audio is unquestionably the perfect home to deliver truly epic Dan Dare audio adventures that are the embodiment its comic book inspiration.”

The first volume, containing three stories (Voyage to Venus, The Red Moon Mystery & Marooned on Mercury) and a disc of extras is out in December 2016, followed in February 2017 by a second volume containing Reign of the Robots, Operation Saturn and Prisoners of Space along with another bonus disc.

The normal pre-order price will be £20 on Download and £25 on CD (unlocking an instant download on release), but in a Dan Dare Day offer on 12th September, for the following 24 hours, each release can be pre-ordered instead for £15 and £20 respectively. This offer ends at mid-day on Tuesday (UK time) — and the clock’s ticking!

Find out more at Big Finish