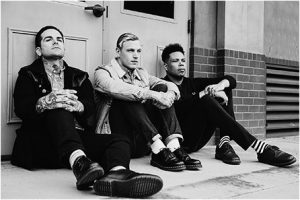 DESCENDENTS Liveage In the late 80’s, Before I had even turned 10 years old, I got exposed to American hardcore after myself and my brother obsessed over the Santa Cruz Skateboards Streets on Fire video. This video soundtrack was life changing… I had never heard a noise like it in my life. I was an English kid growing up in a town just outside Birmingham and I heard American punk rock, before I had even heard the Sex Pistols. The entire soundtrack was 80s SST- Black Flag, Bl’ast, Sonic Youth, Firehose, Minutemen etc. But the standout tracks for me were those by the Descendents. I fell in love with the melodies to Silly Girl and Coolidge. When I turned 13 and became more savvy to Birmingham’s independent record shops, I bought a copy of Somery, before realizing the recordings I knew so well were in fact live. So I eventually got my hands on Liveage. And every other album, for that matter. A few years ago I had the pleasure of working with Bill Stevenson in the studio whilst tracking for NOFX’s Self Entitled album. It was awesome. And a fucking crazy experience for the young me. My band will be opening for the Descendents in Hollywood soon. My life in music just gets weirder and weirder!

DINOSAUR JR Where You Been I don’t really think Dinosaur ever influenced my own creative output. But they were responsible for giving me that “lightbulb” moment when I decided I needed to play electric guitar and maybe try to be in a band. It happened when I saw them perform Start Choppin’ on late night British TV show “The Word” in the early 90’s.  I think I was 10, because I managed to blag an acoustic guitar for my eleventh birthday. Where You Been was actually the first album I ever owned. Musically, it’s not my favourite record of all time or anything, but it managed to make such an impact on the direction of my life and my passion for creating music, so it’s really important to me. I now have the artwork tattoo’d on my arm. I met Jay Mascis a few years back. He later dedicated a song to me on stage. Cheers J!

LED ZEPPELIN II As far as I can remember this was the first record I ever placed on a turntable.  The opening riff of Whole Lotta Love was just as impactful as the process of playing a record. It blew me away (and still does) that one of the biggest rock n roll bands ever, formed just a few miles down the road from where I was placing the needle on that record for the first time.

OASIS Definitely Maybe As a teenager in the 90’s I was definitely influenced by a lot of brit-pop bands, stuff like Elastica, Stone Roses, Ocean Colour Scene and early Blur. But none of it was as impactful as Definitely Maybe.  This record changed everything in mid 90s Britain.  The songwriting is incredible. This music reminds me of my adolescence in England more than any other, because it was almost the soundtrack to the entire nation during that era.  I also think Oasis gave a lot of working class kids (and adults) who didn’t live or associate with London, hope- Because they were every day lads, with no prospects or future, yet so positive and confident that they could do whatever they wanted with their lives via music. That made a massive impact on me and every other kid that was about to fail their G.C.S.E’s and get thrust into a life of crap minimum wage work.  I recently met Gem Archer and Andy Bell from Ride/ Oasis. (Lee from Snuff introduced me- thanks Lee!) We hung out for a bit and had a couple of drinks. Ended up talking about Crass a lot. For the record people, it seems Oasis were more punk than “some might say” (anyone see what I did there?)

THE CLASH London Calling I really don’t know if this is my favourite Clash record. It’s so hard to pick one.  Their debut was the first one I ever heard and loved. But London Calling was definitely playing a lot during high school and reminds me a lot of that time of my life. It was the first record where they really spread their wings and experimented with all different kinds of genres, and surely be one of the first punk bands to really do this. Not only were they experimenting with different styles, but they were doing it really fucking well.  Something not many bands can pull off when they try to get outside the box.

THE JAM Greatest Hits Some might say Greatest Hits albums don’t count, but surely they do when they act as a gateway into discovering a bands back catalogue. My brother had this on CD and I copied it onto a tape and played it relentlessly, playing air guitar and drums to The Eton Rifles when I was supposed to be doing my homework. I loved Paul Weller’s voice. I’ve always had quite a low register and difficulty singing in high keys. So singing along with Paul in my teens helped me gain confidence and acceptance with having a low pitched voice. By my late teens I began getting a few Weller comparisons, so I slowly started checking out more of the jam back catalogue. But it all started with this greatest hits from my brother when I was 12. Weller (along with The Beatles, Fugazi and the film That Thing You Do) also made me want a Rickenbacker guitar.  I met Paul Weller briefly at a festival we were both playing in Japan. We were in the same hotel. Nice Guy.

GREEN DAY Dookie As I was learning about English bands like The Clash and The Jam, it was really inspiring to hear the new wave of American punk that was happening around 1994. Because up until this point, all the music I was getting into and learning about were mostly bands from the past that didn’t exist anymore. A lot of American stuff from that mid-90s era really influenced me Because it meant I could actually go and see punk shows and witness a scene that was happening right around me at that time. Rancid’s And Out Come the Wolves and NOFX’s Punk in Drublic were big ones for me. But I think Dookie might have to get most credit. What an incredible record. Amazing song writing- no fat or excess… Just straight to the point power-trio-punk. I think I learnt to play every song on guitar when this first came out.  The drums on this album are insane- so much energy and intensity, but still remaining tasteful and serving the song before anything else.

I got to produce and engineer a side project of Tre Cool’s a few years back. Needless to say, working with the guy who played drums on Dookie was a little bit of a head-fuck for the 13 year old me playing along to that record in his room!

GUNS ‘N’ WANKERS  For Dancing and Listening First off, best band name in history! This album is a bit of a gem that probably never got the full credit it deserved, I imagine it gets shadowed by the Snuff  legacy (since it was Duncan Redmonds’ project in between the first Snuff break-up/ reformation). I should point out that this record is probably a tie with Snuff’s Demmammussebebonk for me.

My first ever punk show was NOFX in 1995 at Wolverhampton Wulfren Hall. This gig introduced me to local British underground bands (who were opening) Funbug and Skimmer- both highly influential bands (and later, friends) for me. But I also bought a copy of the first Fat Wreck comp Fat Music for Fat People. This comp taught me about all the great early fat stuff, bands like Propagandhi and Good Riddance blew me away because they were bands that actually stood for something, much like the old ‘70s and ‘80s punk I had already been listening to. But the coolest thing about this comp was realizing there were English bands like Snuff and Guns ‘n’ Wankers involved in this scene. The fact they were normal people, living a couple of hours down the motorway in London, made it all seem very real and attainable for me and my band.

This record is awesome. Possibly some of Duncan’s finest songwriting in my opinion. There’s a high dose of Beatles melodies and harmonies going on mixed with classic early 90s UKHC/ indie. The production is a bit questionable, but I’ve really come to love how unique it is. I’ve since had the pleasure of playing shows with Snuff and touring with them as crew and as such, I got to spend some time questioning Duncan on the making of this fine album.

ELVIS COSTELLO This Years Model I bought Elvis Costello’s greatest hits on vinyl when I was about 17. I enjoyed it. But it wasn’t until I was 21 that I toured with a band from New Jersey called The Milwaukees, that I really got turned onto his early albums with the Attractions. I Really liked the drum pattern in one of The Milwaukees songs I kept hearing night after night. When I mentioned this to their drummer, Pat, he told me it was ripped off and that I needed to buy a copy of  This Years Model when I got home. I did just that. I also ended up buying several other Costello records and going through quite a heavy phase under his influence, especially on my own songwriting. His voice was really cool and quirky to me. His lyrics always some-what intellectual, poetic, clever and interesting, even if I didn’t always understand them. The bass player ripped. And the fact they mixed Farfisa organ with a punk, rock n roll and Motown/ soul influence, always blew me away. I was already a big Squeeze fan, so when I realized that Elvis had Produced them, as well as The Specials, I didn’t need any more convincing.

THE MUFFS Blonder and Blonder  I first heard the Muffs when I was about 14 from a copied cassette that my mate Jay borrowed from his cousin. Minor Threat on one side. The Muffs on the other. Yes Minor Threat were obviously influential for me, but I want to mention a couple of not so obvious records and bands within this list.

A couple of years later me and my first girlfriend, Kirsty, tracked down both the first muffs record and blonder and blonder. We copied them onto a cassette and played the shit out of them driving around in her mini.  Their singer Kim Shattuck is still a favourite songwriter of mine- I’ve always loved how she can write a childlike nursery-rhyme esque melody and combine it with one of the gnarliest, snottiest screams I’ve ever heard, all in one line of a song. Equal parts, Punk, Grunge, Riot Grrl, power pop and 60’s British Invasion… I love The Muffs! I met Kim a few years ago and I think I freaked her out.