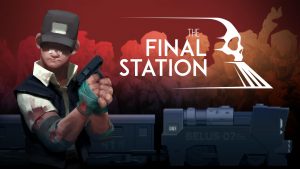 I like my games like I like my music, underground, dark and always the underdog. The gaming industry is a cesspool of profit first, product second. I baulk at AAA games with their day one DLC’s and their corporate cock sucking entry fees. So I decided a long time ago to skip that universal bend me over and goose me line down on Corporation Street, I kept my wallet intact and proceeded to bail over the railroad tracks and straight into Indie alley. Here is where I lay my hat among the dark programming enigmas who still have a love for the industry and its sleazy patrons, I call this my gaming home!

So today I bought my ticket to board this pixelated train and rode it to the very end of humanity!

The Final Station developed by Do My Best and published through Tiny Build appeared to me at first glance to be a roguelike, zombie action, micro-management game with lots of permadeath goodness. I was kind of a little derailed to find that in actual fact The Final Station was nothing more than an adventure game with very little action and not much strategy.

You play the role as lead engineer, taxi driver, trolley dolly and doctor without thankfully any kind of career crossdressing as you traverse across the apocalyptic wasteland picking up and dropping off passengers and scouring towns for goodies.

The Final Station never really pulls out of comfort zone station and up to full speed to be honest but this was not a bad thing when I came to realize the games shortcomings. You see I really don’t enjoy too much micro-management, I get that in my crazy day to day job! So when I play a game I want to relax, not flap about like the Swedish chef ending up more stressed out than when I first sit down at my entertainment cubicle! 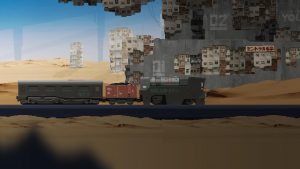 So, the game in short, has you the protagonist, traversing the ravaged wastelands in some crappy train.  During the trip you have to manage the train, making sure the electrics are working enough for the power, check random email messages and a load of other bollocks I really couldn’t care to mention.  All this boils down to is making sure you push a button or pull on a slide when the time comes, it’s hardly taxing and not as frustrating as I thought it would be.

Pull safely into a town and then it’s time to chat with the unremarkable citizens who usually don’t put up much of a fight when offered a free trip to the next town. The journey becomes a juggling act of keeping the train moving forward while keeping your passengers well fed and healed, get them safely there and get a treat in the form of cash or a weapon upgrade. I found this part of the game to be the most tedious and memories of car journeys to the coast as a kid would come flooding back, are we there yet, are we there yet? Over and over and over again! 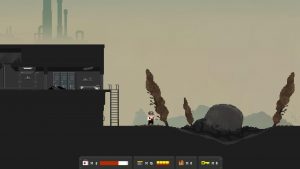 Where the game shines is the town exploration with its sometimes gloomy musical score and its apocalyptic pixelated scenery. The game has some sort of story all about a virus turning its citizens to some sort of ‘non Zombie because Zombies are overdone by todays standard but we however are some kind of dead, alive person which would make me a fucking zombie kind of thing’. Confused? Me too, however these little non zombie zombies are not that hard to dispatch but refrain from going Johnny Rambo due to ammo shortages, the telegraph punch when opening a door is your friend here people, remember this!

So the game is a mixture of strategy and action platformer that really does not outstay its welcome. The Final Station does not try to be something it’s not and I respect the developers for this, it’s just a game, nothing more and nothing less. The game takes about seven hours to get to the finale and its head scratching end. In the end I felt like I had enjoyed my voyage staring out of the proverbial train window gazing upon its pixelated wonderland all the while humming along to its gloomy musical score. 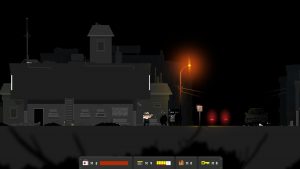 Final verdict: If you prefer your games to be a voyage aboard the Orient express then I would stay at home watching Emmerdale Farm or something. However if you’re like me and find a grey day trip on the 7:53 am from Sheffield to Cardiff leaving platform six strangely enjoyable then this is a train worth boarding. Alan Wright