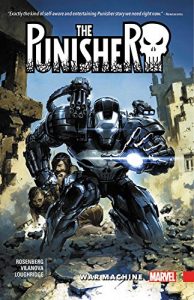 The best Punisher stories are the ones that just let Frank be Frank. They don’t try to humanise him, they don’t try to diminish what he does or temper who he is, they don’t bury him in an endless ocean of psychoanalysis or attempt to justify his psychosis, they just point him in the direction of the bad guys and let Frank do the rest. Because at the end of the day, even though his audience can see method in his madness, can maybe offer a glimmer of understanding for his original motivation and sympathise with the heart breaking, tragic events that set him on his course, we know that in reality, Frank, thanks to his blinkered black and white view of the world, is a homicidal psychopath with the blood of thousands on his hands. But before his obsession with vengeance and his twisted take on justice transformed him into the Punisher, Frank Castle was a soldier. He was a decorated warrior and a natural tactician, a career military man who, if fate hadn’t turned his life upside down, should have risen to the very top of his chosen profession. And in War Machine, that’s the man that Nick Fury approaches to do a very specific job for him, one that Frank despite everything else that’s he done, can’t turn down. Because at the end of the day, Frank Castle is, was and always will be a soldier. And soldiers always do their duty.

The job that Fury wants Frank for is, in the grand scheme of things, relatively simple. He wants Frank to travel to an Eastern European country, meet some “interesting” revolutionaries and kill them all. It’s Fury working to the nth degree of plausible deniability, the ultimate spy masters idea of regime change. Send a psycho to kill a psycho, and in doing so, clean up the mess that S.H.I.E.L.D. left behind, the one that allowed a neo-nazi maniac and his bloodthirsty death squads to seize control of a country. But as crazy as Frank is, even he couldn’t take on an entire nation and win. Unless of course, he was armed with the right weapons; which is why Fury all but gives him the keys to War Machine and sends him on his merry way. And the result boys and girls, is every bit as bloody, brutal and violent as you’d hope it would be. The bodies get piled high, bones break, limbs get scattered here, there and everywhere and Frank doesn’t quit, despite the best efforts of foes and friends alike to get him to do so, until he’s fulfilled his mission, because in Franks’s world it’s either kill or be killed and it’s never over until the fat lady has been blown to pieces.

Matthew Rosenberg doesn’t just follow the golden rule of good Punisher stories, he sticks to it like glue, clings on to it until his hands are raw and his mind is spent and War Machine is testament to his sheer wilful adherence to Frank’s first law. He lets Frank be Frank, but he also lets him be the soldier he was one more time. He gives him the right tools to do the highly questionable job that he’s been sent to do for the right reasons, and in doing so poses a question that no-one up until now has thought to ask. What would happen if Frank Castle was given the power of a demi-god? What would happen if instead of just having guns, explosive and knives at his disposal, Frank could fly at supersonic speeds, had multi-repeating cannons, missiles, a submissive artificial intelligence and enough armour to withstand a direct, point blank hit from a tank? Would he still focus on street level crime, or would he spread his gaze much further afield? Would Frank still be Frank? What do you think? Remember the unshakeable rule? Matthew Rosenberg does and along with his partners in crime, Guiu Villanova and Lee Loughridge who turn Franks world into a highly detailed, noir infused theatre of blood, bullets and pain, he delivers a high octane, thrill a minute, espionage packed story of redemption, punishment and justice that makes you question your moral compass and consider the possibility, for the briefest of moments, that maybe, just maybe, Frank is right. Oorah! Tim Cundle