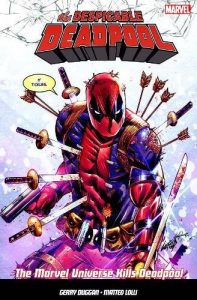 He’s killed the Universe, and now in an unhinged attempt to find some peace of mind and a modicum of “justice” for the countless souls that he’s dispatched along the way, in a semi-psychotic, it’d be kind of sweet if it wasn’t so deluded stab at karmic tit for tat, Wade has lined up the Marvel Universe to kill him. Wait, that’s sort of dropping you in the deep end isn’t it? Let’s rewind a bit and I’ll try to fill in a few blanks and make things a little clearer. So, friendless and number one on the costumed crime fighters most wanted list after being duped into murdering Phil Coulson by Captain Hydrameria, Stevil Rogers when he was the biggest baddest villain to ever sit in the White House, Wade figures the only way out of the predicament that he’s in, and the best thing for all of the folks that he actually cares about, is if he was rubbed out of the world, and their lives, permanently. So, Wade being Wade and doing things the Deadpool way, he puts an irresistible bounty on his own head, sits back and waits for everyone to come and kill him.

Thing is though, nothing ever works out the way Wade wants it to, and his plan to do away with himself once and for all doesn’t exactly work out the way that he thought it would, or wanted it too.  When the apex predators of the super-criminal fraternity and the most powerful individuals in superherodom can’t put an end to one fourth wall shattering, former Weapon X experiment, it’s almost enough to drive old Wade mad. Or at least it would be if he wasn’t already stone cold crazy. And not even his former boss, now back on the side of the righteous, and his one-time best friend can talk him down this time, as Wade finally realises that if you want something done properly, you’ve got to do it yourself.

Once again Gerry Duggan nails Deadpool. Not in a saucy way you filthy minded perverts, I mean he absolutely, one hundred percent manages to transfer all that he was, is and always will be on to the page. And even though, thanks to Clive Cussler developing a habit of erroneously squeezing himself into his latter Dirk Pitt novels, I hate it when writers appear in the stories that they’ve written, when Gerry pops up in Wade’s latest adventure, his scene stealing appearance adds to the tale and didn’t make me angry or secretly vow to track him down and have some pretty serious, and quite severe, words with him. Gerry gets Wade and it shows in every line of dialogue, insane plot twist and deliciously dark joke that makes The Marvel Universe Kills Deadpool the two thumbs up with whipped cream and a cherry on top rollercoaster ride that it is. And while Duggan is the master of Deadpool literature, Hawthorne, Koblish and Lolli are the genii who know how to bring Wade, his friends and foes and word to life via their pencils, brushes and other assoretd tools of the artists trade that they use to do art things, which is why this book looks every bit as good as it reads. Oh, and the Ken Kasey meets Bobby Ewing flavoured ending that hits Wade’s reset button?  That’s exactly how you bring the curtain down on a first act and make your audience endlessly excited to witness the next chapter and leave them feverishly clamouring for more. Encore Deadpool, encore…  Tim Cundle