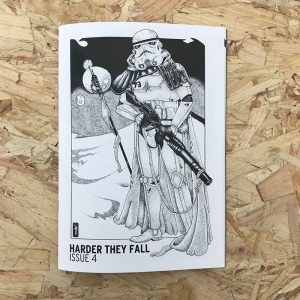 There was a time in the punk scene, that stretched from the mid-eighties to the beginning of the twenty first century, when zines were rife and plentiful and every time you went to a show or a record store, you’d emerge with an armful of cut’n’pasted, xeroxed fan created magazines that would provide enough reading material for a month. And it didn’t stop there, because every zine reviewed other zines and printed their contact addresses, so as soon as your stockpile started to wane, you’d send off for another bunch of zines and the process would repeat itself ad infinitum. For nearly fifteen years I was locked in the vicious cycle of zinedom and I loved every second if it. Heck, I was so enamoured by the whole thing, that I started my own. And twenty years ago, Mass Movement started life as a cut’n’paste mag that was illicitly copied after-hours in my wife’s then place of employment.

Then the internet arrived, printing costs went through the roof and it became easier and more cost effective, the last two factors becoming more relevant the older l became, to do everything online and the zine explosion, like the dying embers of the Big Bang, faded into the background and apart from Artcore and Threat’n’Ink, I kind of tuned out of and mostly forgot about the whole thing and how exciting it could be. At least, I did until Harder They Fall fell through my letter box and onto the door mat, which after I’d opened it and sat down to have a look at what it was all about with a cup of coffee, immediately  hooked me in and kept me quiet for the next two hours.

Comprised of a series of effortlessly absorbing and incredibly personal  interviews with members of bands from the late nineties through to the present day UKHC scene and personal, almost intimate, musings and columns, Harder They Fall is a razor sharp, focussed confirmation of the power that Hardcore and all that it brings, the friendships, ideas and music, has to change your life for the better. Editor, writer and everything else Harder They Fall related bod Nathan is one of those blokes that you either immediately relate to or you  just don’t get. Me, I like the cat, I genuinely love his thought process and his take on the world, and from what I can gather from his prose, the reasons that he was drawn to Hardcore were pretty much the same as mine were, the scene offered us the same things and we both gladly accepted everything that it gave and taught us.  If you’re looking for some judgemental thesis that espouses radical political ideology and declares some one person drone band to be the only thing that matters in any scene, then brothers and sisters, Harder They Fall isn’t for you. Take your thrice whipped, Sumatran cat shit coffee bean latte to the back of the room and re-read your wank stained, lonely tear soaked copy of War and Peace again instead. If however, you’re looking for a brutally honest, intelligently written and at times extremely personal zine that celebrates Hardcore and geek culture, then Harder They Fall, much like those pesky droids were before Obi-Wan worked his magic, really is the zine you’re looking for. Ignore that old Jedi mind trick and order it here Tim Cundle