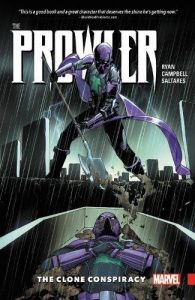 By now, the whole of four colour fandom is aware of the convoluted clone and resurrection schemes of the Jackal that threatened to not only collapse Spider-Man’s universe, but the rest of the world as well.  The Clone Conspiracy was wide ranging and densely plotted and dragged Pete and his nearest and dearest into its fold. The Prowler is the story of Hobie Brown’s – sometime Spider-Man double and perpetually over-shadowed would be hero , involvement in the saga. Recently “murdered” by Electro and brought back to life by the Jackal in order to work for him, The Clone Conspiracy is the story of a good man torn between honour, duty and doing what he knows to be right. Unsure who he can trust, Hobie is sent out to further the Jackal’s agenda with a relatively low-key, low-priority mission to stop a hacker finding out more than they should about New U and the big bad’s plans. Nothing involving Peter Parker is, as Prowler discovers to his chagrin, ever simple and he’s soon caught between his former and current employer in a fight to the death that forever alters his perspective on the role he’s adopted in the superhero community.

Sean Ryan’s gritty and punchy narrative suits Hobie perfectly, as it’s more akin to a hard-boiled detective story than that of a traditional costumed crusader, and is an apt vehicle to tell the tale of a man without powers making his way in a world filled with demi-gods. However, it feels ill placed with the computer rendered art of Jamal Campbell, whose style makes the book feel more like a stop-motion comic and isn’t exactly a natural fit with Ryan’s noir flavoured tale. And while it doesn’t have an impact on The Clone Conspiracy as a whole, it does have an impact on the story’s momentum and in places makes it feel a little flat, but that’s a minor quibble and in future, I’m sure both Ryan and Campbell will more than prove themselves in creative partnerships that make the most of their considerable talents. As for Hobie, I’m hoping that this isn’t the last that we see of him, but something tells me (namely the closing chapter of Ryan’s tale) that the Prowler will be adopting a low profile for a while… Tim Cundle