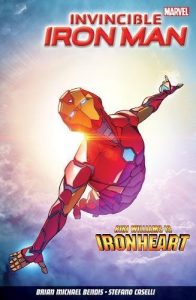 Nothing lasts forever. Not even Iron-Man. When Tony Stark fell at the hands of Captain Marvel in the closing moments of Civil War II, the curtain descended on the long, illustrious and incredibly complicated career of one of the Marvel Universe’s longest serving heroes: Iron-Man. Being a futurist though, Tony had planned for that moment and placed his faith in a fifteen year old super-genius from the American Mid-West. Having developed her own armour and made her presence felt during the conflict that finally took Iron-Man off the board, Riri Williams was the logical choice to succeed the man who inspired her. Untrained, undisciplined and raw, but full of potential, the one thing that she was in need of more than anything else was a mentor and teacher, someone to train and guide her through the trials and tribulations that line the road to superherodom.  And who better to do that than Tony Stark? Having foreseen the moment of his own demise, and having uploaded his conscious into wherever people upload these things in the realms of Sci-Fi and comicdom in order to become artificial intelligence, Tony becomes Riri’s guide and Ironheart is the story of how a lonely teenager came to walk in the footsteps of giants and earn her place in the pantheon of superheroes. And it is absolutely fantastic.

You know those all too rare comics that sends shivers of electrical excitement down your spine and make the hairs on the back of your arms tingle and stand on end?  Yeah, this is one of those books.  Of course, being a Bendis story, Ironheart is far more than just a bare bones origin and early days adventure, and in these pages, he’s let his imagination and creativity run wild and has excelled himself and in doing so, has exceeded the wildest of fandoms expectations.  Riri’s history and her reason for wanting to fly and right the wrongs of the world is heart-breaking, but instead of making her a victim, Bendis has emboldened her with vision and purpose. She isn’t some two dimensional teenage stereotype, she’s bright, intelligent, witty and sassy and knows her own mind, but at the same time is wise enough to know that she knows nothing and is willing to learn, adapt and do whatever she needs to in order to achieve her goals. And the same is true of the supporting cast, as each and every character in Ironheart is a fully formed individual guided by their own hopes, dreams and inspirations, each of whom (along with Riri) is dropped into a complex plot formed from, and around, a multitude of interwoven threads, that delivers far more than its initial promise, sets up secret agenda’s and introduces Riri to her first nemesis. Oh and did I mention the mind shattering, eye popping, finely detailed and honed artwork (supplied by the far too bloody talented for his own good Stefano Caselli) that makes Ironheart pop off the page? I didn’t? Well, I have now. Between them, Bendis and Caselli have created something truly magnificent, and if I’m brutally honest, this is easily my favourite book of the year so far. Astounding…  Tim Cundle