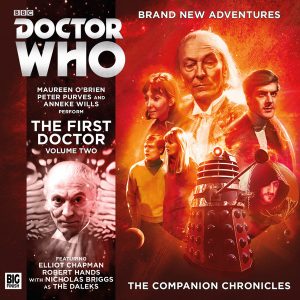 Attention fellow Morrissey and Leonard Cohen fans – this latest volume of companion chronicles is a pretty downbeat affair, so is something you will (and I did) enjoy immeasurably. Big Finish presents for your delectation four stories dealing with the worst of humanity and alien-kind, of the cruelty that we can impose on each other for simply wearing a different coloured uniform or speaking a different language, of fear bred by ignorance, superstition and design from those with a vested interest, and of the effects that it has on those caught up in the mania that inevitably follows. Four of Doctor Who’s current best authors urge you to hold a mirror up to the times in which we live, and have written a set of cautionary tales with one simple but powerful central message: we are better than this.

Before you leap into a pit of despair and decide that you’d rather rub your knuckles against a cheese grater than listen to these stories (admittedly, I’m not selling this very well), you do need to know one more thing: every single one of these stories contains a very special ingredient, and the perfect antidote to all the terrible things that occur in each story, and that ingredient is hope. From revolutionary France to the planet Shade to Lewes to Renaissance England and beyond, there is always, ALWAYS hope.

And with that in mind, I hope that I’ve convinced you to give these stories a chance. Here’s a quick run through to whet your appetites further:

Fields of Terror by John Pritchard

Landing in revolutionary France at the height of the Reign of Terror, The Doctor, Vicki and Steven are caught up in the middle of a dire situation. Revolutionary soldiers are killing anything that moves in the field of battle, be they royalist soldiers or members of their own regiment. The bloodshed and human suffering is appalling, and before long the Doctor and his friends find themselves in an inn. This is no ordinary lock in, as something begins to terrorise them from outside.  A hooded figure seemingly impervious to bullets scratches at the windows, and before long the terrorisers become the terrified.

Maureen O’Brien gives a fantastic performance as the petrified Vicki, and Robert Hands is scarily convincing as he sneers and bullies his way through the story as leader of the French soldiers in a story light on laughs but heavy on edge-of-your-seat drama.

Across the Darkened City by David Bartlett

Steven Taylor has been captured by The Daleks and is separated from The Doctor and Vicki. Things, as you might expect, look pretty bad for my second favourite Blue Peter *presenter. Desperate times call for desperate measures, and Steven forms an alliance with an injured Dalek who needs his help to reach a transmat through a city in perpetual darkness.

Peter Purves shines as a desperate Steven, and a “punch the air” moment when he gives us a glimpse of his wonderful William Hartnell impersonation is a lovely reward for the listener. (Well, I punched the air anyway.)

The Bonfires of the Vanities by Una McCormack

The Lewes Bonfire Night is the largest November 5th event in the world, and is held in the usually peaceful county town of Lewes, East Sussex, every year on 5th November. In this story the First Doctor, Ben and Polly arrive in Lewes in the late 1950s and find that the Bonfire revelries have been allowed to get rather out of hand…

…if you are looking forward to the Christmas episode on BBC1 this year, then this links beautifully with the final scene from season 10. The Doctor is close to death, and holding his regeneration back by sheer force of will (sound familiar?), meaning that it is left to companions Ben, Polly, and librarian Mary to tackle the immediate problem of the gangs of “Bonfire Boys” and the alien Guys that have come to life. This is a story that examines how hate breeds hate, how this hate is perpetuated by tradition, and is very much a cautionary tale for the uncertain era in which we live. Listen and shudder…

The Plague of Dreams by Guy Adams

Big Finish save (what I think is) the best story to last. Beautifully written, exquisitely framed and perfectly pitched by Anneke Wills and Elliot Chapman, this is a story unlike any other, and proof that our favourite television programme’s infinitely variable format is as alive and well today as it was over 50 years ago. The Plague of Dreams adds layers of both mystery and clarity the first Doctor’s regeneration and manages to be utterly compelling, magical and, well – just wonderful.

Even in the darkest places there is light and there is hope, even if you have to look incredibly hard to find it. This set of stories starts with the cruelty of war and ends with a bittersweet bow and is as varied a tapestry as the first Doctor era ever was. Harsh but gripping from the start, this set is highly recommended. Bex Ferriday