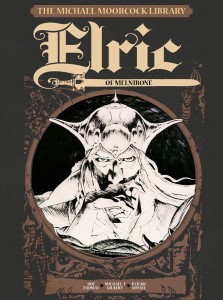 The Michael Moorcock Library: Elric Volume 1: Elric of Melnibone – Roy Thomas, Michael T. Gilbert & P. Craig Russell (Titan Comics)
Like many fantasy and science fiction fans my age, Michael Moorcock’s Eternal Champion saga’s, the stories of Hawkmoon, Elric, Corum etc., along with Robert E. Howard’s Conan, are the definitive sword and sorcery novels and have since I first read them, become the yardstick against which I measure almost all genre, or more specifically fantasy fiction. Each is an incredibly tough act to follow, but none more so than Elric, the finest of Moorcock’s many heroes and literary creations. He’s a flawed Emperor, physically at least, who rules a cruel and ancient kingdom that thrives on decadence and pleasure; and it’s only when freed of his burden of stewardship that he finally comes to accept his destiny as the wielder of the black blade, Stormbringer. Three and some change decades after I first read of his exploits, he is still, for me at least, the definitive sword and sorcery anti-hero, so it’s strange that I’ve never encountered Ropy Thomas’ comic adaptation of his adventures before now.

Starting, as does everything, at the beginning, Thomas followed Moorcock’s novel almost to the letter as far as the events that shape and mould the central character in ‘Elric of Melnibone’ are concerned. It’s here where he faces the many headed machinations of the would be usurper Yyrkoon, where the weight of the crown becomes too much for him and he falls under the spell of the Lord of Chaos, Arioch, where he and his love Cymoril are forced to part and where he is bound to Stormbringer. It’s a story of betrayal, loss and discovery that could so easily have become just another book filled with blood splattered panels, gore filled curses and every genre stereotype; and perhaps in the hands of any other writer, that might have happened. Thomas however, understood the subtext of Elric’s story, and transformed Moorcock’s novel into a wonderful romantic tragedy, a story of doomed lovers beset by fate, circumstance and the scheming minds of jealous rivals. Davis and Russell’s artwork lends the story an ethereal, almost psychedelic feel, that combined with Thomas’s engaging writing, give the story a dream like quality, that brings Elric’s world and adventures to life perfectly. Does it look dated? A little, yes, but at the same time it possesses the same, strange, timeless quality as Moorcock’s novels, allowing the reader to fully submerge themselves in the power struggles, feuds and battles that first forged Elric. I still can’t quite believe that I’ve never stumbled across fantastic adaptation before. Still, better late than never I suppose… Tim Mass Movement