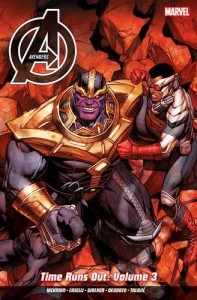 Avengers: Time Runs Out Volumes 3 & 4 – Jonathan Hickman, Kev Walker, Mike Mayhew, Mike Deodato, Stefano Caselli & Dalibor Talajic (Marvel / Panini)
It started with the dream of two me; two men who wanted to make the world a better, safer place. So it’s only fitting that it ends with the same two men at each other’s throats, consumed by hatred and locked in battle as the world begins to burn around them. We always knew that it wasn’t going to end well, because contrary to popular opinion not every story has a happy ending and ‘Time Runs Out’, Jonathan Hickman’s epic Universe changing tale of men and women giving everything they have and fighting against the inevitable until they can fight no more, does not end well. That’s not to say it doesn’t end in jaw dropping spectacular fashion or that it isn’t one of the most audacious and incredible crossover events of the last couple of years, or that doesn’t burn its way into your psyche, because it does. It does all those things and so much more. But for all of the players on Hickman’s many layered board, heroes and villains alike, ‘Time Runs Out’ doesn’t end well. So, if you’re the kind of sensitive soul who expects everyone to stroll hand in hand, into the sunset when all is said and done, I’d walk away now and just keep on moving. If, on the other hand, you enjoy well written, beautifully illustrated, intelligent, gritty, and hard as diamond story-telling that refuses to pull its punches and keeps you guessing until the final frame, then brothers and sisters, this is the book for you. 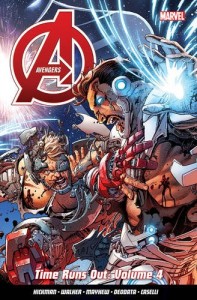 ‘Time Runs Out’ is the definition of long game plotting, planning and execution, and when I tell you that it’s execution is nearly perfect, I mean it. It’s an exquisitely detailed and meticulously delivered tale of the end of everything; of gods, heroes, monsters, unbelievably powerful beings, priests and cults of opposing ideas and ideology; of science versus faith and intellect versus action that transverses space and time. It’s a story that paints the grandest picture of all whilst acknowledging, and revelling in, the part that the smallest of colours and brushstrokes play in creating the whole. And, it’s tale of men and women, who when faced with impossible odds spit in the face of fate and do what they have to in order to see one more sunrise. It’s heart breaking and uplifting (Thor and Hyperion’s final moments are guaranteed to bring a lump to anyone’s throat), it’s scale is, quite frankly, astounding, the characterisation and dialogue are incredible, it’s packed full of mind-bending ideas and concepts, and as I’ve already said, looks (thanks to Caselli, Walker, Deodato, Talajic and Mayhew) exquisite, and is, in all honesty, a triumph of truly epic proportions. Astonishing… Tim Mass Movement