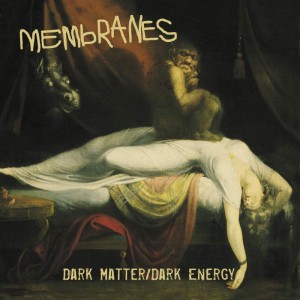 The Membranes – Dark Matter/Dark Energy (Cherry Red Records)
The Membranes have been around for years, first forming in 1977 and hailing from Blackpool. They are fronted by John Robb who also has Goldblade to sing for, this being the first album in 26 years and a long overdue wait it is too. On first listen there is a lot of dischord within the songs, a cacophony of sound. They certainly threw the rule book out of the studio window when writing the album, with the driving dirty Bass, pounding (almost tribal) drums and the searing guitar complete with harmonics. The reason I know this band is because we shared the same stage in the mid eighties, didn’t really appreciate them back then as I was blinkered on pure punk and nothing slightly left field but I’m going to have to listen to the earlier stuff because if this is anything to go by I should like it.
There is a hint of Public Image Ltd only in the fact that it dares to experiment with the different sounds like on PIL’s first 2 albums.
“Money Is Dust” probably shades it for me as a stand out track as it keeps you mesmerized for the full 7 plus minutes and wouldn’t go amiss as incidental music in “The Walking Dead”, very haunting indeed. Also, who doesn’t like a band that’s not afraid to use a cow bell!! Paul Hoddy