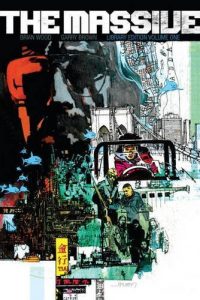 If the learned men and women who know such things are to be believed, then it’s only a matter of time until humanity faces unprecedented ecological and climate disasters which could, effectively, put paid to civilisation as we know it. We are the architects of our own doom, and sooner or later, the man-made Sword of Damocles that’s been precariously dangling over our heads for more than half a century is going to fall. And in The Massive, Brian Wood’s taught, atmospheric apocalyptic thriller, the blade finally drops and the end begins.

The Massive is the story of Callum Israel, former mercenary turned eco-warrior and the founder of the conservation group Ninth Wave, and the crew of the Kapital’s search for their sister vessel, the ship which the story is named after, and for. Following The Massive’s intermittent trail from one side of the planet to the other, this first volume of Wood’s story see’s Israel and his shipmates battling pirates, attempting to deal with “rogue” nation states while pursuing a stolen Chinese nuclear submarine and navigating and negotiating the waters of the new world that Nature’s time-bomb has forged.  It’s an involving, slow-burn story, one that’s heavily reliant on characterisation and the crew’s interactions not only with each other, but with the ever changing face of their now unfamiliar home as well.  Nothing and nobody is what they first seem, or appear, to be, with Israel’s friends and foes alike all working to their own agenda’s, which creates a cast of complex, realistic and oddly relatable players. The tantalising way in which Wood drip feeds his readers ever increasing amounts of information about “The Crash” (the name given to the disasters which have brought mankind to its knees) suggests that there’s more to its cause than just climate change and whatever it is that set the apocalypse in motion will inevitably be the reason behind the disappearance of The Massive  and will also become inexorably entwined in the fates of Israel, his crew. The artwork is staggering, it’s stark naturalism and detail lending the ravaged Earth a beguiling beauty, while at the same time capturing the violent, and often graphic, action of the pragmatic characters in all of their brutal, noir infused dark glory. Fiercely intelligent and terrifying, The Massive is a bold, creative story in which no-one wins, and given the evidence presented in this initial collection, everyone is destined to lose. This is end. And it’s only just begun… Tim Mass Movement