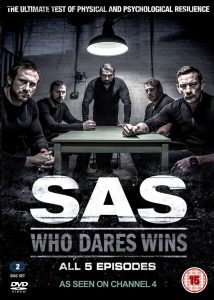 In 1980 I watched a team of heavily disguised men storm the Iranian Embassy in London. And even though I was too young to understand why they were doing what they were doing; or what had necessitated them being there, some part of knew that they were doing it to help other people. From that moment on, all I ever wanted to be was a soldier. Eight years later, following a drunken night out filled with stage diving, UKHC and far too much beer, that dream ended when I fractured my lower back following a misjudged and mistimed leap from a window ledge. The folly, and “invulnerability”, of youth forced me to re-evaluate what I wanted to do with the rest of my life; and while fate led me down a far different path to the one I had originally envisioned for myself, my fascination and over-whelming interest in the military and -in particular- the Special Forces didn’t fade. Which is almost certainly why, when this series was shown on Channel Four earlier this year, it became, for me at least, compulsory viewing.

Based on a reality television format, the premise of the show is relatively simple. Take thirty individuals from civilian life and, under the guidance and tutelage of five ex-Special Forces operators, put them through some of the most rigorous aspects of the SAS selection process to see if any of them would actually make it. Drawn from every walk of life, from students to physicists, professional dancers to MMA instructors, the participants on the course are (thanks to gruelling mental and physical challenges) during the five episodes, gradually whittled down and eliminated. Who Dares Wins not only offers fascinating insight into demands of training to be, and what is expected of, a Trooper in the SAS, but also the kind of men who readily and wholeheartedly embrace the lifestyle and challenges that the role imposes. While the training process is brutal, unrelenting and punishing and each step on the journey demands the utmost from those taking part, that isn’t what makes Who Dares Wins essential and compelling television. The real meat of this show lies in the tales of the instructors and the candidates that intersperse the various stages of selection. It’s these astonishingly personal stories of their lives both on and off the battlefield, of the factors and experiences that helped to mould them into the people they are, that make it so totally engrossing.  And in the end, when all the pain has ended and all the dust has settled, you feel, in some miniscule way, that you’ve taken each and every rewarding step with the few who actually make it. Thoroughly recommended… Tim Cundle