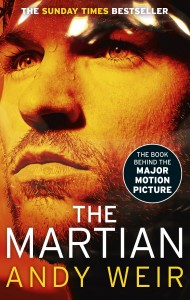 The Martian – Andy Weir (Del Rey)
In our ongoing exploration and experimentation of the planet Mars to see just how inhabitable it really is, astronaut Mark Watney was stranded there after an emergency evacuation. Now he must use science, maths and his profound imagination to survive on the barren sphere. This book is not only relevant to the plans in motion to send people to mars, it shows, using accurate science, the worst parts of living on mars and juxtaposes it with how possible it is (with the right equipment). The book’s tuition side teaches the reader how space travel works and how NASA handle any situation (even dire circumstances such as in the narrative).
As Andy Weir’s first novel, the fact that it is a New York Times’ best seller and already having a movie based off it definitely shares the skill of this newbie writer. He writes for fans of science fiction and space travel in general and teaches people who want to get in to it how awesome it is. He writes so well that, even the parts of the book that drag slightly are put their on purpose to show how tedious and boring life on mars. Also, when Mark Watney repeats facts are done not only to reinforce the idea and how he constantly takes these thing into account, but is also done because he probably can’t remember what he already wrote because he was there so long. All this adds to the realism of the book.
It is a ‘feel good’ novel, with the lighted-heated, upbeat, comedic personality of Mark Watney, even when faced with insurmountable odds. Every character in ‘The Martian’ is shown in a good light and no one is antagonised, except when having to make impossible decisions. The mantra of the book is how humanity has an overwhelming desire to help others and it makes you feel good reading the efforts every human makes to aid Mark. The comedy aspect of the book contrasts the darker, twisted elements of what, not only what Watney has to consider, but NASA and his old crew mates as well.
The book makes a huge effort to consider every possibility, good or bad, and mentions ideas that are abandoned instantly after explaining the overwhelming complications. With this we are a part of the decision process, or the surprised party when we hear about the horrible judgements everyone has to make.
‘The Martian’ preys on the intrigue of the unknown, that everyone has, and ropes you in. Using its comical stance and scientific terminology this book is a must read for every sci-fi fan out there. I managed to finish this book in three days because I just couldn’t put it down. It is out of this world. Joe Audsley