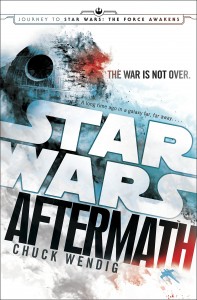 Star Wars: Aftermath – Chuck Wendig (Century)
A long time ago in in a city far, far away, a small boy sat down in a cinema and watched a film that changed his life. And even though the original trilogy ended just six short years later, my devotion to ‘Star Wars’ has been unwavering since the moment I first saw that rebel transport soar high above Tattooine, pursued by a Star Destroyer. My faith in the Force hasn’t wavered for a moment, even when faced with the ill-fated and unnecessary prequels, and like thousands of others world-wide, I’m counting down the days to the release of ‘The Force Awakens’, the continuation of the ‘Star Wars’ saga. But with the new film being set three decades after the events of ‘Return of the Jedi’, and with a lot of the previous continuity (novels and comics) being stripped from the official canonicity, there’s an awful lot of history and mythology to create, explore and catch-up with, because as we all know all too well, a lot can happen in thirty years. And it all begins here, in Chuck Wendig’s ‘Aftermath’.

Okay, look I’m not naïve enough to believe that there won’t be hundreds and hundreds of books, comics and maybe even TV series that will end up covering similar territory and focussing on related events, but as a literary focal point that sets fandom on the path to the new film, ‘Aftermath’ is pretty darn good and it’s an incredibly promising start. The story isn’t complicated or mired in too much obscure Wars lore, and is straight forward enough so that even the handful of people who haven’t seen, or are unfamiliar with, the trilogy can be swept up by the tale without having to worry about not knowing anything about Luke, Han, Chewie, Vader or The Emperor. Don’t get me wrong, it’ll help if you’ve seen the films, it’ll help immensely, but it isn’t by any means a necessity.

Set a couple of months after the destruction of the second Death Star, the “defeat” of the Empire and the death of the Emperor, the central plot of ‘Aftermath’ involves a rag tag bunch of “rebels” (a bounty hunter chasing high value targets, an Imperial turncoat, a mother returning form service with the Rebel Alliance and the son she left behind in order to fight on the front lines) banding together out of exigency after stumbling across an Imperial Council of War meeting being held to decide the future of the Empire. They then set out to disrupt, destroy and delay the gathering until the Rebel fleet can arrive and finish what they started, aided in their mission by the ever-dependable Rebellion mainstay, Captain Wedge Antilles. Compelling characterisation, both heroes and villains spring into fully formed being, good dialogue and a rapidly evolving, entertaining plot – that for some reason which I can’t quite put my finger on reminded me of ‘Where Eagles Dare’, ensure that ‘Aftermath’ rattles along an brisk, engaging and enjoyable pace. With equal thought and measure having gone into the interludes and asides that pepper the story (and doubtless set up another novels and books in both the series and the Star Wars universe as a whole), some of which feature familiar faces and a scoundrel or two, Wendig has managed to do what I previously thought was nigh-on-impossible, delivering a book that immerses the reader, the fan and the devotee into a Universe full of wonderful possibility and a multitude of endless adventures that has restored more than a little magic to the Star Wars franchise . The force is strong with this one… Tim Mass Movement