Warning: preg_match() expects parameter 2 to be string, object given in /var/www/vip4/sites/vip6102689/httpd/htdocs/wp-includes/formatting.php on line 4866
 One Machine launch new video for 'Forewarning' - Mass Movement
x
Spread the love 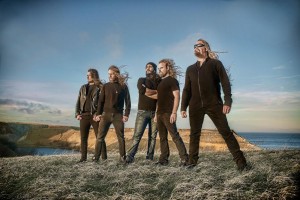 Steve Smyth states, “The video depicts a wild ride into the not so distant future, where we find our rebel team entering a virtual world to reach their leader, the Hacker, only to be interrupted by the world leader the Cynic, busy blanketing all media with his driveling, meaningless rhetoric, with points inside his speech aimed at making our world seem hopeless without him and his leadership. In comes our hero the Hacker to spread the message of hope and independent thinking outside of conformity, and the war ensues, complete with a virus sent via virtual reality. Who will win? Watch and find out!”

While online, make sure to check out part two of the “Making of The Final Cull” video series.

Watch it here: http://youtu.be/2NyoA5Yjd10 In this video, you will hear reasons from each member of ONE MACHINE regarding why they chose to record live as they have, and what they feel is the impact on the sound. This series includes snippets of new music and in-studio footage, in addition to discussing new The Final Cull songwriting, recording and subjects in connection with ONE MACHINE’sIndieGoGo crowdfunding campaign to help offset the costs incurred during the recording.

The IndieGoGo campaign also serves as the official album pre-order, which will be available in Digital Download, CD Digipak, and special edition vinyl formats. In addition, the campaign itself offers many great donation perks. For more information, please visit: https://www.indiegogo.com/projects/one-machine-album-2-production-promo-tour#/story

Fans will have the chance to catch One Machine live on release date, the band will be playing an exclusive one-off show at London’s Barfly venue this Friday, 18th September.