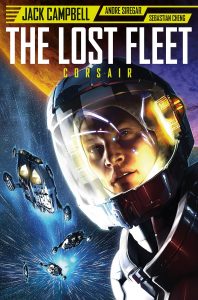 It seems inevitable that if humanity doesn’t succumb to war or fall victim to some cataclysmic event and reaches a point in its history where interstellar travel becomes a possibility, then it will begin to colonise the stars. This idea of a species journeying far from its birthplace to find a new home in the deepest reaches of the unknown, has fascinated and captured the imagination of Science Fiction authors for nearly a century . While some have told tales of an enlightened future in which mankind has outgrown its base urges, others have approached it in far more realistic manner, understanding that humanity is as much a slave to its biological instincts as it is captured by the notion of advancement and exploration and as such, when we eventually touch the surface of numerous new worlds, we will ultimately take conflict and warfare with us.

Jack Campbell is one such author, and in his first comic series based on his widely popular Lost Fleet books, he explores the immediate aftermath of the cessation in hostilities in the century old war between the Syndicate and the Alliance, two rival groups of humans separated by incalculable cosmic distance and wildly differing ideology. Focusing on Captain Michael Geary and his fellow Alliance officers who escape the clutches of the Syndicate and a legion of former enemies led by Destina Aragon, who are desperate to reach their home planet, a former Executive Officer in the service of the Alliance’s foes, Corsair is the story of the men and women caught in the crosshairs and the fallout that surrounds the ambitious plans of tyrants and despots and those who waste the lives of millions in the pursuit of ambition and power.  Space battles, political manoeuvring and the incredibly personal tales, histories and motivations of all those involved in the galactic gaol-break are woven together in a riveting and enticing full throttle adventure that proves that the there’s far more to the four colour universe than capes, costumes and super-powered vigilantes.

Corsair is space opera at its finest, a fantastically imaginative glimpse at a future that seems all too real and recognisable, as societies dominated by corporate structure and policy and a militaristic belief in freedom and democracy clash in the vastness of space. Veering between the plight of the individuals caught in the thrall of the events that engulf the societies emerging from the shadow of war and the losing sides desperate attempts to maintain some sort of semblance of control, Corsair is a richly detailed, wonderful collision of the pulpier adventure stories of Robert Heinlein and the harder edged spacescapes created by the likes of Larry Niven and Alistair Reynolds. Brought to life by the sumptuous, intricate and meticulous art of Andre Siregar, Corsair does away with the traditional tropes that govern war stories trading them for a more complex and evolved vision of the bellicose forces that fuel and wage conflict, while enforcing the conviction that humans will always be driven by their most primitive instincts regardless of the passage of time or how technologically advanced they become. Welcome to the final frontier… Tim Cundle