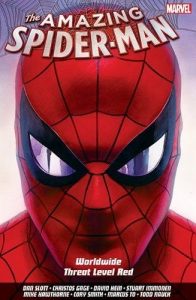 Spider-Man’s life has been defined by his relationships. It was Uncle Ben who engrained in him the simplest of lessons that became the credo he’s lived by since he began his crime fighting career. When Gwen Stacy died, Peter swore that no more innocents would perish because him and that he would never let those he loved, and loves, be put in harm’s way ever again. It was Mary Jane that taught him that love wasn’t a burden and that no matter what he thought or what the Bugle said, that there are people who believe in him. Then there’s his rock, the one person who keeps his feet planted firmly on the ground and who makes sure that he always has a reason to keep fighting the good fight, his anchor, Aunt May. And then there’s Norman Osborn. The Green Goblin, the Moriarty to Spidey’s Holmes, the yin to his yang and the man who, through his innumerable clashes with the wall-crawler, taught Peter Parker and Spider-Man more about what it really means, and what it ultimately costs, to be a hero than anyone else ever did, or could.

Threat Level Red, when you first flip through its pages appears to be a simple series of vignettes, brief stories of Spidey’s new life on the mean streets of New York as the cities web-slinging hero in residence and Science Editor for the Daily Bugle.  In Threat Level Red he finally stops Zodiac with more than a little help from Bobbi Morse and realises the uncomfortable truth about his relationship with his new girlfriend, helps the new Sorcerer Supreme save the city from a mystical bug invasion, teams up with Flash “Agent Anti-Venom” Thompson to stop a top secret weapon of mass destruction falling into the hands of a Goblin gang and helps Betty Brand find some closure while uncovering an audacious criminal conspiracy of epic, breath-taking proportions.  Which, all things considered, is pretty much an average day for Spider-Man. But Threat Level Red isn’t really about Spidey. This is Norman’s story. This is the tale of how he eventually learns to welcome his alter-ego back into his life, and Spidey’s adventures are just the fluff stuff that happens while Norman rediscovers his inner self and who he really is. All of which is preparation, and sets the stage, for the forthcoming confrontation that promises to irrevocably, and forever, change their relationship.

The writing is, as you’d expect from a Spidey book and Messer’s Slott, Gage and Hein absolutely superlative. Fast flowing, immediate dialogue and solid, well rounded characterisation are weaved into endlessly readable and enjoyable plots while the artwork courtesy of Hawthorne, Nauck, Immonen and company is simply stunning, exquisitely detailed and a joy to behold. Threat Level Red is, in short, a Spidey tour de force. That said though, due to it incorporating and tying together plot threads from a number of previous web-centric story arcs, Threat Level Red isn’t aimed at newbies or a great starting point for any unfamiliar with the Spider story so far.  But hey, you can’t have everything can you? And to be fair, you should really be up to date with all things Spider-Man and if you’re not, at this point in the game you should be asking yourself why you’re not and questioning the poor life choices that have stood in the way of Spider fandom. The countdown to the Red Goblin showdown starts here… Tim Cundle