Warning: preg_match() expects parameter 2 to be string, object given in /var/www/vip4/sites/vip6102689/httpd/htdocs/wp-includes/formatting.php on line 4866
 The Iron Ship (The Gates of the World Book One) - K.M. McKinley (Solaris) - Mass Movement
x
Spread the love 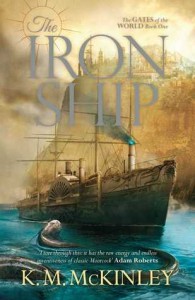 The order of the world is in turmoil. An age of industry is beginning, an age of machines fuelled by magic. Sprawling cities rise, strange devices stalk the land. New money brings new power. The balance between the Hundred Kingdoms is upset. For the first time in generations the threat of war looms.

In these turbulent days, fortunes can be won. Magic runs strong in the Kressind family. Six siblings strive – one to triumph in a world of men, one to survive murderous intrigue, one to master forbidden sorcery, one to wash away his sins, one to contain the terrible energies of his soul.

And one will do the impossible, by marrying the might of magic and iron in the heart of a great ship, to cross an ocean that cannot be crossed.

This seems to be a growing trend these days, swords and sorcery meets the industrial revolution. The Iron Ship falls firmly into this growing genre but, given what I have read so far, stands head and shoulders above the rest. Instead of concentrating on one small area as a setting, The Iron Ship takes on a world which has gods walking through industrial streets in built up cities and a magically powered ship sailing through oceans, continents made of swamps and so much more to pull you into its story.

Concentrating on the six siblings of the Kressind family as the driving force, gives McKinley a vast amount of development opportunity. The world is in a time of change where powers that be have lost their position, and the gods of old are not seen as they once were.  Needless to say, they’re not too happy about this. The search for the lost science of an extinct race is the major focus, whilst the many sub-plots keep things interesting and intriguing; and although the story is complex, it’s handled well throughout and remains easy to follow. As the first part of a new series ‘The Iron Ship’ has ticked all of the right boxes for me, I don’t know how many books McKinley has planned, but there is scope for so many, many more, and as such, I really hope that many, many more will follow in the wake of The Iron Ships. Gav