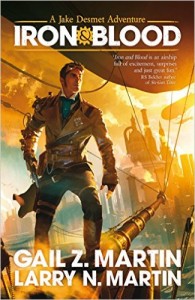 New Pittsburgh in 1898, a crucible of invention and intrigue, the hub of American industry at the height of its steam-driven power. Born from the ashes of devastating fire, flood and earthquake, New Pittsburgh is ruled by the shadow government of The Oligarchy. In the abandoned mine tunnels beneath the city, supernatural creatures hide from the light, emerging to feed in the smoky city known as ‘hell with the lid off.’

Jake Desmet and Rick Brand, heirs to the Brand & Desmet Import Company, travel the world to secure treasures and unusual items for the collections of wealthy patrons, accompanied by Jake’s cousin, Veronique ‘Nikki’ LeClerque. Smuggling a small package as a favour for a Polish witch should have been easy. But when hired killers come after Jake and a Ripper-style killer leaves the city awash in blood, Jake, Rick and Nikki realize that dark magic, vampire power struggles and industrial sabotage are just a prelude to a bigger plot that threatens New Pittsburgh and the world. Stopping that plot will require every ounce of Jake’s courage, every bit of Rick’s cunning, and every scintilla of Nikki’s bravura and all the steam-powered innovation imaginable.

Gail Z. Martin is a bit of a favourite of mine, her prose is fantastic, her ability to visualise a setting is equally as good and her ability to introduce and develop a character is absolutely second to none. Needless to say Iron & Blood delivers. Set up as a bit of a historical fiction style novel, Martin (and Martin) also provide ghosts, magic, monsters, steampunk vehicles and everything else in between. After the setting has been put in place and the introduction of the protagonists has been done the tale starts to take direction and then takes off (pun intended) with speed. The three main focal points all have very definitive skill sets and roles to play, and as expected, play them to perfection. As the first novel in a series there was obviously not going to be a big full stop to finish on, but everything is firmly in place by the end, ensuring that the second book will be a must read. Gav