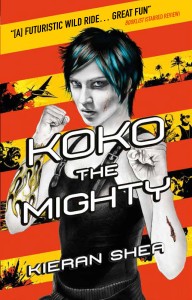 After narrowly escaping death, Koko Martstellar (ex-corporate mercenary) and Jedidiah Flynn (depressed former sky-cop) are busy putting their lives back together, running a saloon/brothel on The Sixty Islands – the world’s most violent and decadent resort. But when bounty agent Jackie Wire comes to collect the outstanding price on Koko’s head, it’s time again for Koko and Flynn to make tracks. Fleeing pell-mell across the Pacific and shipwrecking along a thought-to-be uninhabitable coast, things only go from bad to worse for our heroes… But, hey, that’s the 26th century for you. Buckle up, buttercup. Only the mighty survive.

Koko the Mighty is the second in a series, and although I hadn’t read the first, I’m planning to get straight to it now that I’ve experienced this book. Koko is a mercenary and brothel madam, and she is also, by the looks of things, the most unlucky bad ass that has ever lived. As the story begins, Koko is opening up a new bar/brothel and seems to be on track for the good life, accompanied by Jedidiah Flynn. Which is when things -as with all the best laid plans -start coming off the rails and looking like they are going to end up taking a completely different direction than expected. Author Shea’s dark humour really moves Koko’s journey forward with great skill.

Having not read the first book, I don’t know what the back story is here and it does feel like what I am missing out on is top quality (hence the desire to go back), but it doesn’t stop me getting into the story. The writing is beautifully balanced: fast paced when necessary yet slows down to delve deep into the character and plot development. Without this balance, things could have easily become overbearing or lost, but it holds the interest effortlessly with a tale as fun as it is harsh and the characters are just the business. I don’t usually like to make comparisons of this type but this sits right between an Altered Carbon and Kick Ass kind of get together to me and I like it a lot.  Gav