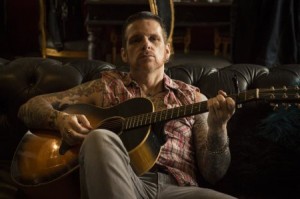 Ricky commented on the track and working with Sam Robinson: “We ended up in the pub one day and Sam said the words to me that every musician hates…he said I’ve written some lyrics’ and you know when someone says that to you 9 times out of 10 they’re shite, they just are. You know everyone is a song writer. I’m not a plumber and I wouldn’t walk into your house and pretend to know how to do the plumbing but people seem to have this thing with song writing like it’s easy and any idiot can do it. So Sam handed me these words and I was just thinking ‘you know I really like this guy a lot’ and every time this happens they’re usually terrible or I can’t use them and you don’t want to hurt someone’s feelings…but he handed me these lyrics and my jaw hit the floor. They were the lyrics for the title track  ‘When Patsy Cline Was Crazy (And Guy Mitchell Sang The Blues)’ and that title alone just evoked so many memories for me from my childhood. The strange thing is that Sam and I grew up about a mile apart from each other and supported the same football team, we had the same working class upbringing but never met each other. Now here was a guy who wrote in this song about the music that his father listened to, which was the same music that my father listened to; about his father working during the week, having a flutter on the horses on a Saturday, winning money, buddies coming over, the whiskey coming out, the cards coming out and we’d get to be the dj’s and get to put the records on – and when you’re 10 years old that was a big thing that you were in charge of the record player. You got to put on Sinatra, Hank Williams, Johnny Cash, Patsy Cline and all these greats, and that was magical….and Sam and I both had that when were kids so as soon as he handed me those lyrics I could hear the song, I could hear the music and I could hear the melody.”

The artwork for the double albums reflect the tone of each – ‘When Patsy Cline Was Crazy…’ showcases the electric rock and roll side of Ricky, whilst ‘Hearts On Trees’ veers more towards tender stripped-back songwriting, influenced by both Americana and, more importantly, Ricky’s Northern Irish roots.

Ricky explains: “Hearts On Trees and When Patsy Cline Was Crazy (And Guy Mitchell Sang The Blues) were written by myself and my good friend Sam Robinson, both albums depict our experiences of growing up and coming from the Greater East Belfast area, not only experiences that have happened to us but historical references and stories that have been told to us by friends and family…in saying that both albums translate those experiences on to a global scale that hopefully anyone geographically can relate to.”