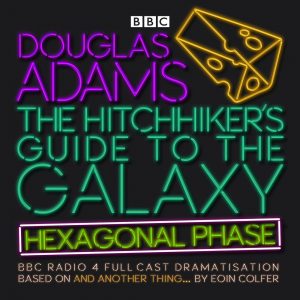 There is a theory which states that while energy is forever recyclable, there is a finite amount of both wit and genius in the universe.

There is a second theory which states that if you try to extrapolate from the wit and genius of a dead man without actually possessing both qualities in abundance yourself, you will inevitably create a black hole, from which not even the chuckles of the most ardent fans will be able to escape as the universe implodes under the crushing weight of forced jollity.

There is yet a third theory, which claims that The Hitchhiker’s Guide to the Galaxy:  Hexagonal Phase has been recorded, thus proving both the first two theories.

The black hole will be along any day now.

As that somewhat tortured opening pastiche proves, you can use the forms that made Douglas Adams a genius without ever in fact being a genius yourself. If you do so, you’ll create…something. It won’t be Douglas Adams, and it won’t, above all, necessarily have the qualities that made Douglas Adams’ writing resonate with millions of readers, listeners, viewers and gamers. The difference between the way Douglas Adams thought about things and the way…most people think about things is the key. Somewhere in that deadline-averse, bath-positive, technology-adoring head of his, genius happened, on the road from ‘needing a few ways for the world to end’ to ‘solving an entirely improbable problem.’ He took the premise of aliens blowing up the Earth and made it comedy gold, using it eventually to explore a whole range of human and universal truths – while still very much trying to write a show that was as densely funny as possible from end to end.

Hexagonal Phase, to give it its due, does that second thing. It tries really, really hard to be densely funny, but it tries really, really hard to be densely funny in the style of Douglas Adams. And that’s rather where the wheels come off the whole thing. Adams wasn’t trying to do anything in the style of Douglas Adams. The essential Douglas Adamsness of it was baked right in, because he was…erm…Douglas Adams, with all the shortcomings that used to make producers tear their hair out, but also, when the work eventually emerged, with a sheen of underlying philosophical curiosity that used the silliness to conduct what were basically thought experiments about, to coin a phrase, life, the universe and everything. That’s what gave the work – which was often loopy in the extreme – the underpinnings that made it interesting as well as funny, the concepts actually turning the jokes into something more than they were.

It’s that philosophical curiosity, as much as anything, that feels missing from Hexagonal Phase. The result is that Hexagonal Phase feels like it’s trying way too hard to be the tabloid version of Douglas Adams – funny planets, absurd peril, intruding ‘book’ entries, with a stab at some social and scientific satire – but it’s coming from a different place, the place of aching in its absolute bones to be Douglas. And not being, because being Douglas was about more than all the funny madcap stuff. He might not have initially intended it to be, but it was.

Now, before we all go and throw ourselves on the non-existent mercy of the Ravenous Bugblatter Beast of Traal, let’s look for the positives. The cast is exquisite and exceptional – it has Professor Stephen Hawking as the Guide Mark II, for god’s sake! Plus all the original cast, with the exception of Stephen Moore, and including both the radio and the TV Trillians. It has Jane Horrocks as Fenchurch, Jim Broadbent as Marvin Mark II, Lenny Henry, Ed Byrne and Mitch Benn. The cast list almost dares you not to laugh at this new Hitchhiker’s.

The plot, bless it, scuttles wildly across time, space and the plural zones of quantum causality, like a beetle trying to escape the Slammed Shoe Of Inevitable Concept-Death. Practically nothing is what it first appears – which, when your daughter becomes President of the Galaxy and marries a platonic talking gerbil, as Arthur Dent’s daughter Random does, is just as well. People pop out of existence in the middle of sentences, the Vogons hatch a new plan to destroy all possible Earths, and all the survivors too, there’s an Irish religious conman who’s not from Ireland after all, a separatist movement who worship cheese, a truly godawful song in the tradition of Hitchhiker’s truly godawful songs (the hardcore fans will remember ‘Share And Enjoy’. It’s like that, only seemingly played for purpose), and an ultimate showdown between a Norse god and an insulting creature who simply won’t bloody well die.

There’s also unlikely love, even more unlikely but what the hell love, galactic politics and of course, gags about tea and ape men and ever-so-smug doors. In essence then, it’s lots of famous funny people, prannying about for three hours in a universe with a Douglas Adams feel, but not really very much of his underlying scope. We say not very much because there are bits that stand out as having an Adams vibe – in fact, there’s one particular section that also features in James Goss’ adaptation of Douglas’ Doctor Who story The Krikkitmen (which went on to see more light of day in Life, The Universe And Everything), more or less word for word. And as we mentioned, it’s important not to oversentimentalise Adams – more often than not, at least when writing the radio series, he was trying to get from one end of an episode to another, and that vibe of ‘absolutely anything might happen to get us there’ survives into Eoin Colfer’s novel, And Another Thing…, and onward into Hexagonal Phase, which is based on it.

But ultimately, Hexagonal Phase proves not that Douglas Adams’ style is alive and well and replicable by the generations of collaborators and fans who’ve come together for one more universal yomp. Rather, if anything, it proves that he’s been dead for seventeen years, and the lack of him is palpable. If you can imagine staging Hamlet when the leading man’s dropped dead, and the rest of the cast is running about on stage trying to cover up his absence, but with extra quantum physics gags, you’ve got Hexagonal Phase. The cast and the writers so desperately want it to work that your heart aches for them, and for yourself when you realise it’s mostly sound and gibberish, signifying nothing. There are some lovely moments, to be sure, baked in for hardcore fans to find, but overall it feels like the last viable flogging of an Arcturan Megadonkey that died at least a couple of light years ago. In the spirit of hearing a journey come to a viable end, it’s at the very least an affectionate way of getting there. But in Hexagonal Phase, Hitchhiker’s feels like a journey that’s well and truly over. Hang up your towels, pop your Babel Fish in a bowl. Have a strong cup of really hot tea. After Hexagonal Phase, it’s time to let Adams, and his most famous characters, be as brilliant as they were, and to let them lie. Tony Fyler