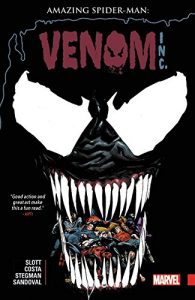 While Venomverse pretty much answered the eternal, burning question ‘What could be better than Venom?’ with a straightforward ‘Why, lots of Venoms of course’, Venom Inc. the latest Spider-Man crossover event goes one step further and asks ‘What would happen if all of the Earth bound incarnations of Venom were to somehow meet? How cool would that be?’ The answer, as it turns out, is that it would be very cool. Extremely very cool.  And I’m pretty sure that the main reason Venom Inc. is so cool is that Dan Slott and Mike Costa keep the story relatively simple and rely on a fast flowing straightforward plot that derives the majority of its drama, as it rightly should in a tale that pulls all of the Venom’s together and pits them against each other, from character interaction and the mayhem, chaos and action that inevitably erupts during, and follows, their convergence.

It all goes a little something like this. The most recent Venom, having been released from prison, acquires a new symbiote and immediately sees an opportunity for using it to become the biggest name in criminal endeavour that the world has ever known. This of course doesn’t sit well with Eddie Brock, Flash Thompson or Spidey and so they determine, after forging a loose alliance between themselves and another rather surprising “ally”, to do their darndest to stop the bad-guy ex-Venom, who now calls himself Maniac from seeing his evil plans some to fruition. So you know, it’s basically a good Venoms versus bad Venom kind of deal, but with a lot more stuff thrown in. Stuff like Anti-Venom, heroes falling by the wayside and then redeeming themselves and an incredibly inventive underworld recruitment tool that stacks the odds against Spidey and his friends, that’s there to drive the thrill-o-meter through the ceiling.  Which it most certainly does, keeping you riveted to all of the Spidey-centic and Venom-rific excitement that fills every panel and page.

With Stegman and Sandoval at the pinnacle of their powers and drawing up an intricately detailed maelstrom of non-stop daring do that acts as the perfect vessel for Slott and Costa’s story, my only real gripe with Venom Inc. is that it’s all over far too soon. Instead of being six issues, it should have been ten, but I guess the creative team following the maxim good things come in small packages knew exactly how to wring the most fun they could out of the canvas they had to work with. And boy oh boy, did they do just that. Venom Inc, thanks to being infused with a slightly retro feel, is almost like an ode to Venom’s halcyon late eighties and early nineties heyday and as a story, celebrates everything that the character was, and is, about to become as Venom evolves far beyond his, by modern  standards at least, relatively humble origins. It’s also all kinds of awesome to see Flash Thompson taking centre stage again and getting back in the game, because even though he started life, much like Venom did, as a complete heel, he’s grown way beyond the limitations of his beginnings and become far more than anyone ever imagined he would or could. Good guys really do wear black. And white. And red and blue… Tim Cundle