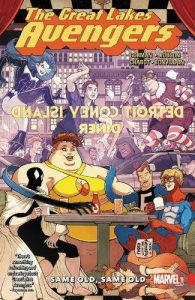 Few men are destined to become giants; and few heroes, regardless of whether they have powers or not, are destined to transcend to the realm of the truly “super”. Same Old, Same Old is the story of five individuals, who despite their garishly coloured costumes, mutant gifts and well meant, and often seriously misjudged, best intentions were never meant to be superheroes. Due to a legal technicality, stubbornness bordering on stupidity and some high up person responsible for such things taking their eye off the ball during one of those really important moments when they really should have been focussing on what they were supposed to be doing, Dr. Val Ventura (a.k.a. Flatman) is finally granted his heart’s desire and given permission to revive his former team, The Great Lakes “Avengers” as an official franchise of the world’s premier superhero team. With their biggest hitter, Squirrel Girl, having graduated to the major leagues and being assigned to guard Detroit, a hotbed of super-criminal activity, Flatman sets about putting the “band” back together. Which given their dysfunctional relationships, substance abuse problems and trust issues, is a lot easier said than done. But no-one ever said that being an Avenger was easy and Val is a very determined man, and with Big Bertha, Mister Immortal, Doorman and Good Boy (their newest recruit) all finally on side, they set out to make the world a better place by taking down one bad guy at a time. And this is where their problems begin as the Great Lakes Avengers aren’t exactly great at what they do and forced to confront a tornado of political corruption and greed, illegal slimming and body-shaping drugs and their own personal failing and faults, they find themselves flailing hopelessly against the tide of fate as they drift further and further out of their depth.

Zac Gorman’s story of the perpetual underdogs trying to be more than they are and prove to the world, and themselves, that they can be better than they are, is a laugh out loud funny, off kilter and endearing story of the goofballs, oddities and average heroes that, much like the rest of us do in the real world, make up the ninety percent of the powered folks in the Marvel Universe. Focussing on the ideas that just because someone has powers it doesn’t mean that they can be super, that everyone has internal issues and problems whether they’re flipping burgers or saving all of creation from Universe consuming entities; and the reality of the things we desire most in life is often very different to the fantasy, Same Old, Same Old is – like it’s main characters – different, amusing and incredibly enjoyable. Brought into full colour being by Robson, Chabot, Bonvillain and Louise, this is one book in which the art perfectly captures the characters, the tone and mood of the plot and mirrors the story in every glorious detail. It looks good, the story is great and thanks to its everyman core is instantly accessible and will almost certainly, to some degree, strike a chord with, well, everyone. Because at the end of the day, much as we’d all like to think that we’re cool, suave, hip and happening, it’s a universal truth that we are in fact, the exact opposite of all that we imagine ourselves to be. Great Lakes Avengers… Assemble! Tim Cundle