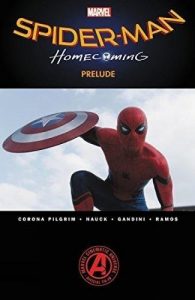 Serving as a precursor to the soon to be released film of the same name, Spider-Man: Homecoming Prelude is for the most part, a sort of what-you-missed guide for those who, as The Phantom might have said, came in late. The main part of the book is comprised of a re-telling of Spider-Man’s reintroduction to the Marvel Cinematic Universe in Captain America: Civil War and while it’s a fun, fast read that’s given an immediate and energetic feel by Todd Nauck’s artwork it feels a little overplayed and almost unnecessary given the box office shattering receipts of Civil War. Because almost all of the folks who are going to go and see Homecoming already know how the new Pete met Tony and the rest of the Avengers and their nearest and dearest allies, having seen it on the big, and small, screen. So, while the first half of the book isn’t what I’d call compulsive reading, it is, like I said, fun. However, it’s the latter part of this book that, if you’re one of the aforementioned folks who arrived late at the Spidey shindig, is worth the price of admission.

Concentrating on Spider-Man’s initial encounters with the Vulture and Shocker, the second part of Prelude includes two classics  from the Stan Lee, Steve Ditko and John Romita Snr era, both of which are jam packed with snappy, lightning quick dialogue, pacing and story-telling and quick jab, sock it you, eye popping art. However, while they’re good, and they are very, very good, it’s the inclusion of a tale (originally featured in Invincible Iron Man #7) from particularly turbulent and bruising period, during the first Superhero civil war, in Spidey and Iron-Man’s often fractious and difficult relationship, that really gives this book some gravitas and depth. It doesn’t spare the readers’ sensibilities and doesn’t tip toe around the issues that both men are trying to come to terms with; it just plunges you head first into the whirlwind of mistrust and wariness that’s thrown up an almost impenetrable wall between them. This is where the real heart of this book lies and while most long-term devotees of the wall crawler will already have these stories stashed away in their collections, newbies looking for some real insight into the characters that they’re about to see do battle in Homecoming could do a lot worse than pick up and read Prelude before taking their seats in the cinema. Welcome to Spidey’s world… Tim Cundle